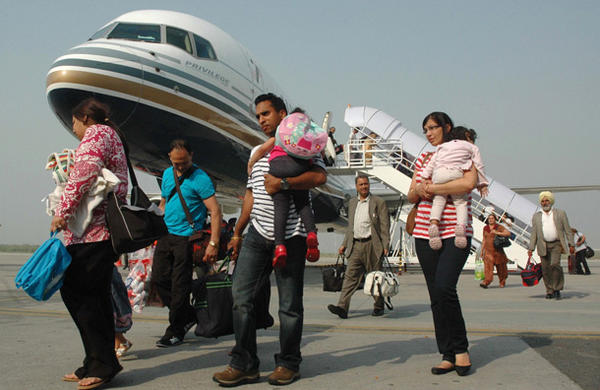 The passengers were told the firm had “run out of cash to fund the last leg of the trip” to Birmingham and the flight would only continue if they coughed up the cash.

This unbelievable thing happened to the passengers in a COMTEL Airlines flying from Raja Sansi International Airport in Amritsar to Birmingham, UK When their flight landed in Vienna, Austria for refueling.

According to one passenger "It was surreal. I couldn't believe it was actually happening. It was something that would happen in a film, not in reality... forced to pay for the petrol for the aeroplane."

Comtel majority shareholder Mr. Bhupinder Kandra said money paid to travel agents had not been passed on to the airline. No body knows how mush truth is there in Mr. Kandra's statement?

Good thing is that the UK Civil Aviation Authority has agreed to refund the money extorted from the passengers.

So next time, you fly using these cheap airlines, don't get surprised if they ask you for more money in mid-air.

He goes out to buy a Car, but returns with a Jet Plane

Hritik Is The Sexiest Asian Alive

What number are you among 7 Billion People on Earth?

Company Director dressed as Woman tried to avoid the Press

Padmavati: Not releasing on december 1 in the UK, confirm sources

Padmavati cleared for UK release, but producers to wait for CBFC nod