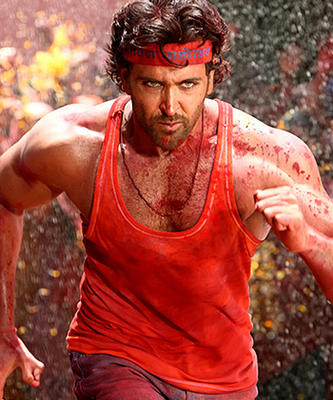 It seems Hrithik Roshan has finally beaten the Khans in the numbers game. It has been reported that the satellite rights of the remake of the much talked about 'Agneepath' has been sold for a whopping Rs. 41 crores and the buyer is Zee TV. This is about 1-2 crores more than Aamir Khan's 'Dhuan' which co-stars Kareena Kapoor and about 5 crores more than SRK's 'RA.One' which was sold for about 35 crores. It even puts to shame Salman Khan's 'Bodyguard' which was sold for about 33 crores.

It is also reported that Shahrukh Khan's 'Don 2' has yet to find a buyer because the film's producer Riteish Sidhwani has quoted a figure that the channels are finding hard to justify. It seems that Amitabh Bachchan's original 'Don' was a hit on the television screen, but the same is not the case with Shahrukh's 'Don' or even with Aamir's 'Dil Chahta Hai'.