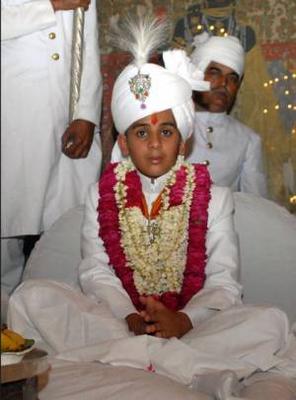 As the world is going gaga about the William-Kate wedding in England, what do you know about our own Desi Royalty? 12 year old Sawai Padmanabh Singh was crowned the King of Jaipur in a regal ceremony at the lovely royal palace yesterday. When India won its freedom and the princely states were abolished, Jaipur was being ruled by Sawai Bhawani Singh who was famous for his polo. Sawai Bhawani Singh was largely considered the last Maharaja of Jaipur. But after his death two weeks ago, his grandson has been crowned the new Maharaja. This proves that even if the government does not recognize royalty, the royal family still exists. The local people still treat them as royalty, and doubtlessly they live like royalty too.

FIR Against Yash Raj Films, But Why?

Oprah All Out To Woo India

The Mother-Daughter Duo Are Sporting The Jaipur Pink Panther Jerseys

John Abraham At Jaipur For Promotion Of Shootout At Wadala

Student Of The Year Team At Jaipur For Promote Their Movie

A Peek into Bebo's Home