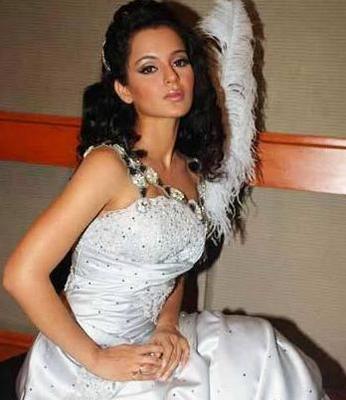 The media is constantly chasing our celebrities to find out who got which surgery when. We keep reading reports of Saif Ali Khan's botox treatments and then there are reports of Salman's hair transplant surgeries. Our leading ladies are not to be left behind. It seems that almost every Bollywood actress had had a nose job at some point. There are tummy tucks, eye jobs, boob jobs, mouth fixing...and what not!

One Bollywood actress who has been the topic of discussion (in the context of plastic surgery) many times is Kangana Ranaut. The media is constantly hounding Kangana with reports of boob jobs and nose jobs. There was even a report of a lip job having gone wrong. A picture of swollen lips on Kangy's face was also posted. But later we found that it was some kind of reaction and not surgery!

Once again, Kangana has clarified about her nose/lip and boob jobs. This time, on Karan Johar's "Koffee With Karan". She says that she is "all natural". When asked if the rumors of her alleged surgeries embarass her, Kangy says, "Honestly, it was never annoying at all to read things about me. On the contrary, I really enjoyed all those speculative pieces that were being written. Trust me, but to read about your own surgeries is amusing."

When quizzed about her busty new looks, Kanagana explains that her bust size has increased owing to eating North Indian food while shooting for Tanu Weds Manu. This was a time when she could not work out due to an injured foot. But she piled on yummy Punjabi food and hence the improvement in her looks.

Kangana adds, "It is discipline, exercise and meditation which bring your real beauty out. This was exactly the case with me as well", says Kangna who is actually making people stand up and notice her chic look as seen in KNOCK OUT as well as NO PROBLEM. "Everything has grown naturally for me. If I am glowing better than before, it is because any young woman starts shining as she moves ahead in her 20s. Same is the case with me as well." If you continue to look so amazing, the audience will surely say No Problem!

Sara Khan Thinks Her Lip Job is Amazing, Do You Agree?

Is This Priyanka's Original Nose?

Dealing With Stress At Work

Sanya Malhotra: My job is to choose good scripts

Sanjay Back To Home For 30 Days

No Shaadi without Naukri?
LATEST EVENTS / GALLERIES
Most Read
...loading