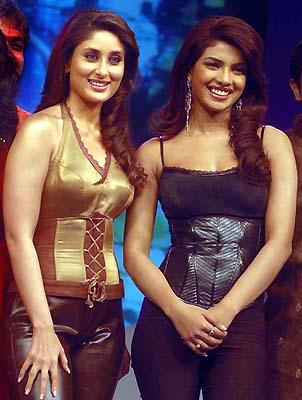 It’s official. The fight for the top is messy and dirty and Bollywood’s top two heroines are just proving that. We are talking about none other than the beautiful and sexy Priyanka and Kareena. And it seems that their boyfriends will also be dragged in this mess.
The first salvo was fired by Kareena when she in her interview on Karan Johar’s popular show “Koffee with Karan” said that she wanted to ask Priyanka where she got her accent from. Not to take things lying down, Priyanka in her interview with the same host on the same show retorted that she gets her accent from the same place that Kareena’s boyfriend does.
It has been reported that in her interview with KJo where Priyanka makes an appearance with Shahid Kapur, said “I want to tell Kareena that I got my accent from the same place where her boyfriend got his”. Now we do not need to tell you all who Kareena’s boyfriend is. Justifying her stance, Priyanka said that she has studied overseas and thus may have acquired the accent.
But the whopper is yet to come. It has been reported that Priyanka further added fuel to the fire by saying that Bollywood does not take Kareena too seriously. It has been reported that she said “I`m flattered that Kareena thinks I am a good actress. But otherwise I don`t think people take Bebo too seriously."
It gets more interesting from here. When she was asked what she would steal from computers of Bollywood superstars like Shah Rukh Khan, Shahid, Kareena and others. PC giggled and said, "Does Kareena have a computer in the first place?"
Now knowing Kareena, she definitely is not going to take it lying down. Either which ways this catfight promises to be interesting.

Kareena wears a sari with her nickname on the Pallu; proves she's her own favourite

'With her beauty and talent, she is going to rock the industry': Kareena on Sara’s debut