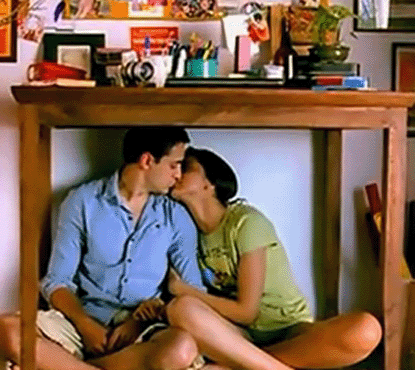 As our society opens up and love-relationships find acceptance, Bollywood cannot help but incorporate these changes. Live-in relationships are not uncommon these days. So we have movies that show such relationships. Physical relationships without strings attached, and premarital sex are very common. So movies cash in on this reality and show it all. After all, movies are nothing but a mirror of the society.

But is it really necessary to show the act of love? Is it really essential to have kissing scenes and other intimate scenes in a film that talks about relationships?

Apparently this is true. Bollywood star Deepika Padukone feels so. Deepika has recently shot a kissing scene with Imran Khan in their film Break Ke Baad. When asked if it made her uncomfortable, Deepika said, "No, not at all. When you are making a modern love story, some of these things are necessary. It was as easy or difficult like any other scene. The media has created a lot of hype because it's a kissing scene but when you watch the film, it's in context."

Aishwarya Rai Bachchan had to bear the brunt of her hot kissing scene in "Dhoom 2". After watching the liplock with Hritik, the Bachchans were left fuming. It is said that now the whole family censors out such scenes before they are even shot! Poor Ash!

AS our female leads accept kissing as a part of the deal, what do our male leads feel?

Aaamir Khan rarely does a film without a kissing scene? What could the reason be? Is it that the kiss can be sold as the USP of the film? Or is it because kissing scenes make the movie marketable? Or is it that Aamir really really likes his costars and expresses that in the film? God knows what it is!

Other stars pander to what the director says. After all, it is not easy to get good offers and dictate your own terms. Very few people in the film industry are that lucky!

We Are Just Friends!

Are You A Good Kisser?

Taapsee Pannu: Had more scenes in Badla than Big B yet it's called his film

Zareen Khan's shocking revelation on casting couch, reveals a filmmaker wanted to 'rehearse a kissing scene' with her

I have only one scene in Bharat, says Tabu

TOIFA 2016:Varun Dhawan talks about his first kiss on the red carpet

Big B is angry with Aishwarya Rai Bachchan for bold scenes in "Ae Dil Hai Mushkil”?

I kissed a girl
LATEST EVENTS / GALLERIES
Most Read
...loading