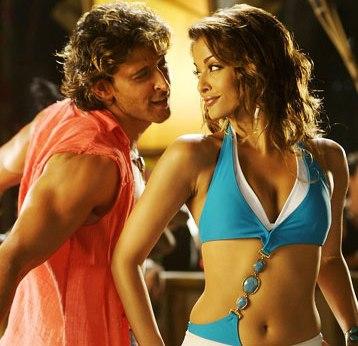 Director Sanjay Leela Bhansali is ready to showcase his next creation. He is all set to release Guzaarish, his next film with the lovely Aishwarya Rai Bachchan and the handsome Hritik Roshan.

Yes, another Aishwarya-Hritik film. The chemistry this duo shares is one of the best in Bollywood's history. Ash and Hritik are two of the most attractive people in Bollywood. When they come together on the screen, they create instant magic with their palpable chemsitry.

Now you might imagine that after the Dhoom 2 kissing fiasco, these two might be wary of exploring their on-screen chemistry. But we are told that Aishwarya and Hritik have taken their combined "oomph" to a new level in Guzaarish. The two have reportedly shot such an intimate scene for Bhansali, that it shall be remembered in Bollywood's history. The scene has Ash moaning in ecstasy as they get intimate.

Remember all the media reports of the Bachchans' ire when Ash kissed Hritik in Dhoom 2? Considering that, you would imagine that Ash would not play with this fire again. But Aishwarya is a thorough professional. When Bhansali explained to her that this scene was an integral part of his film, she agreed to shoot it and completely gave herself up to the director's command.

Abhishek might not be too happy about this, but Aishwarya and Hritik are going to scorch the screens this Divali!

Hattrick For The Hottest Jodi

Aishwarya Rai Bachchan At A Longines Event In Malaysia