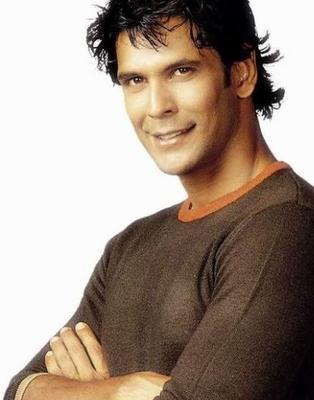 Priyanka Chopra made her TV debut with Khatron Ke Khiladi on Colors yesterday. The show staRTED YESTERDAY IN ITS 3RD SEASON. This is the first time that the show hopes to cater to its female audiences, with a bevy of hunks vying for the top honors this time.

The biggest (and sexiest) name on the list is that of Milind Soman, who is not just a super model with a face that can kill. Milind is a NAtional level swimmer and a keen fitness enthusiast. He has always talked about his love for running and other outdoor activities. He is easily one of the most popular choices for the numero uno slot. At least that's what we thought. But Milind Soman has taken the numero uno slot in an entirely different way. He is the first to exit from "Khatron Ke Khiladi - Season 3"!

We know you are as shocked by this news as we were. Even at 44, this guy is hot enough to make you go weak in the knees with just one look. He is probably on every woman's "cheat list" of celebrities. Understandably, we expected a lot more from this hunk.

The stunt that caused Milind's exit was an underwater one. The contestants had to go underwater in Rio de Janeiro's Teresopolis Farm to unlock weights hung under a sheet of fire. This is probably what will remain the biggest regret of the show for Milind. The stunt itself was not very tough, but the six degrees chilling water probably scred off Milind. In his own words, "I should have tried more especially because it was a swimming stunt. I could have done it easily."

What did you guys think about Priyanka's performance yesterday? Did you feel that she is trying a little too hard to create an attitude that comes across as fake and unconvincing? That's what we think. What do you think?

Milind Soman, Ankita Konwar celebrate Rongali Bihu with egg fight ‘which apparently is the thing to do’

Celebs At The Press Conference Of Nagrik Movie

Bipasha Basu And Milind Soman At The Pinkathon 2014 Press Meet

What Happens When Parents Eat All The Kids' Candy?