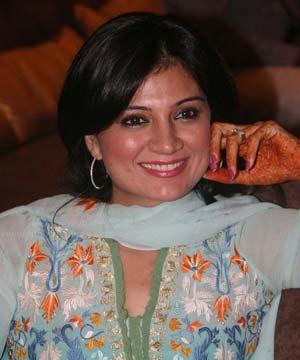 You will be truly shocked to hear the latest Bollywood gossip that is doing the rounds. Producer/singer/actor Himesh Reshammiya is now being reported as a two timing husband. Himesh, who was regarded by everyone as a traditional family man, now finds himself embroiled in this controversy about an extra-marital affair!

The gossip is that Himesh Reshammiya is seeing TV actress Sonia Kapoor. It is being reported that the two have been involved in a relationship since the last four years. Now this is not a relationship on the sly. If reports are to be believed, the whole Reshammiya family knows about this affair but seems to have accepted it as fate.

Himesh's wife Komal Reshammiya is known to be a traditional Gujrati woman. It is very unlikely that she would leave her husband for a trifle affair. But their son Swayam is known to dislike Sonia, rebelling against his father's treatment towards his mother.

Though Himesh's affair with Sonia was first reported in 2006, he has managed to maintain peace in his household. Sonia is always welcome at his house and he even goes on holidays with her. After the recent demise of Sonia's father, she has become even closer to the Reshmmiya family. Even Himesh's parents welcome her into their home as a part of the family. It is said that Himesh has tried hard to project an image that Sonia is a "family" friend and is welcomed into his household by everyone.

Now all this might be just media gossip, without a shred of truth to it. So we bring you comments of the people involved in this juicy gossip.

Sonia Kapoor: "Himesh and I have worked together on shows and TV serials for years. We're great friends. I'm also very close to his family. We will continue to be so. Komal is a lovely person. There are no problems between us. There's no truth to the affair story."

Komal Reshammiya: "We have known Sonia and her family since years. She's a very good family friend so the question of Swayam or I objecting to her coming home doesn't arise at all -- in fact, Swayam loves her a lot."

Himesh Reshammiya:"Sonia and my family have been close for over 12 years. After her father's demise, our families have bonded even more. There is no stress between my wife and her. In fact, we all hang out as one group of friends. For holidays, too, both the families go together. For the Sri Lankan holiday, it wasn't just her and me but our families as well. Komal and Swayam -- or anyone in the family for that matter -- has no objection to Sonia coming home at all. We are like one big family. I often go to Sonia's home. No one has any objections. I haven't been financing her expenses or recommend-ing her. She is doing her own thing and is busy with her own serials."

So, what do you think?

Do You Love Chopsuey?