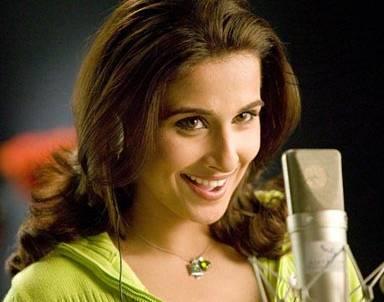 Riding high on the success and critical acclaim that was given to "Paa", actress Vidya Balan seems to be on a roll these days. If some people didn't like "Paa", they were seen gushing about Vidya's performance in "Ishqiya". Yes, she did rock that one!

Everyone knows that Vidya is a fabulous actress and one can always rely on her to give a path breaking performance if the script is right. Guess who is so impressed that he wants to work with Vidya? Karan Johar! If reports are to be believed, Karan is very impressed with the work that Vidya has done in the past and he is keen to work with her in one of his future projects.

A little birdie tells us that Vidya lives just across the street from Karan's Dharma Productions office. Being neighbors, they know each other well and are also known to be good friends. Vidya is not only friends with Karan, but is also known to be very comfortable with his family. Now Karan is busy with the release of "Dharma Productions' I Hate Love Storys". It is being said that Karan's next project is Dostana 2. So obviously we wonder if Vidya's on the cards for Dostana 2!

Karan says, "Vidya is a tremendously talented actress. My company, Dharma Productions, is very keen on working with her. But there is no film as yet.” Presently, he busy with the promotional event of Dharma productions latest release, ‘I Hate Luv Storys’ and soon work on ‘Dostana 2’" So if Vidya was indeed chosen for Dostana 2, she'd be cast opposite the hot and hunky John abraham. We hear John has been working out strenously to get those killer looks again. Sounds great!

When asked about Karan, Vidya said, "Karan Johar is one of the wittiest people I have met. He had me in splits. No wonder, he writes beautifully." Now that's one mutual admiration club that can put all the sweet meats to shame!!!

Who is Ananya Pandey and Why Do People Want Her to Be the Next Dharma Productions Gal?

Has Hrithik Roshan been approached for Sourav Ganguly’s biopic? Find out the truth

SRK and Karan Johar will reunite for a film soon?

Karan Johar to bring Salman Khan in to Dharma Productions?