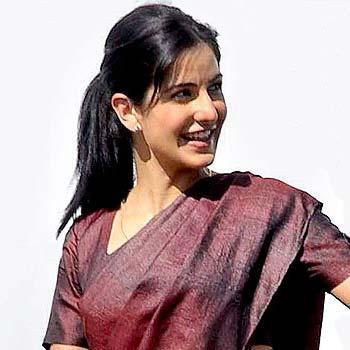 Prakash Jha's "Rajneeti" is one film that is being eagerly awaited both by trade pundits and the audiences. The interesting cast of the film is only one of the reasons why "Rajneeti" is being talked about. The comparisons with real woman leaders of the Gandhi family, the subject itself, and the lead actors are all much too interesting to resist talking about. The highlight of this film, of course, would be Katrina Kaif donning a character (and a look) that she has never tried before.

Having successfully played the part of the quintessential glam doll, Katrina now wants to establish herself as an actress with mettle. "Rajneeti", no doubt, is her first step towards critical acclaim. But will the critical acclaim really come?

Recently, the makers of "Rajneeti" organized a press conference for the film. Everyone expected that the lead actress, Katrina Kaif would address the press in effortless Hindi. After all, much has been said and written about Katrina's Hindi lessons for the film. So the journalists were a little surprised and let down when Kat kept fumbling for words while speaking Hindi. She spoke the language, but certainly not effortlessly. In fact, our little birdie tells us that Katrina would resort to English ever time she was at a loss for words in Hindi. This left the attending journos a little amused and wondering if Kat could ever make it to "effortless Hindi". Someone asked Katrina to speak in Hindi and pat came her reply, "The problem is that I am talking in Hindi but you want to listen only in English”.

Our little birdie tells us that Prakash Jha, who had started off in a great mood for showing off his leading lady's linguistic abilities, immediately jumped to her defence when she did not perform as expected. In Jha's words, "It’s a different ballgame altogether in the recording studio where the actual Hindi expertise comes into picture. Katrina has done a fabulous job in that."

But Jha sahab, why are you so worked up about Katrina's Hindi? Kat is the most popular actress in Bollywood today and she's also the most bankable, Hindi or no Hindi. It really doesn't matter whether she can get her accent right or not. The public doesn't care about the language she speaks coz they just love her anyway! There's a winner for you!

Katrina wishes to do 'Charlie’s Angel' with Aish and Sonam