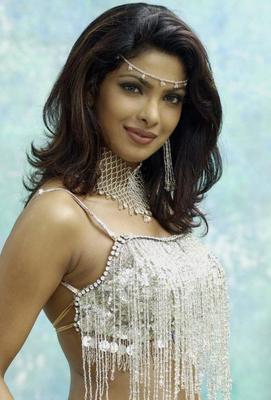 Priyanka Chopra is one lucky lady. She gets to do all kinds of crazy things in her films. First she played 12 characters in What's Your Rashee (though not convincingly enough), and now she is all set to kill 7 men in her next film. Vishal Bhardwaj's "Saat Khoon Maaf" is a film wherein the central character (Priyanka) marries 7 men and kills all her husbands. Sounds weird? Well, that's Vishal Bhardwaj for you! He is known to make films that shock people and he gets away with it every time...that too with a lot of critical acclaim and appreciation!

But this is not the only crazy thing about SKM. The other weird fact about this movie is that Priyanka is going to marry a famous Bollywood actor in the film, and she will also marry his real life son in the film. Now that's something that has never been done before!

Naseerudin Shah, who is one of the finest actors in Bollywood, has been approached by Vishal to play Priyanka's oldest husband. Guess who plays her youngest husband in the film? 20 year old Vivaan Shah, who happens to be Naseerudin's son in real life! It seems that Vivaan had no plans for pursuing an acting career. But when Vishal Bhardwaj saw this young lad, he immediately felt that Vivaan was just right for playing this character and he made an offer. Now when a successful and talented film maker like Vishal approaches you for working in his film, you NEVER say no, right? So Vivaan has agreed to play one of Priyanka's husbands, just like his charming father has.

Some people feel that this casting coup of sorts is a little too bold and shocking. But Vishal is convinced that this is what he really wants. He has already started shooting his film in Coorg. Are you wondering who are the rest of Priyanka's husbands in this "7-husbands-7 murders" story? The final list is Naseeruddin Shah, Irrfan Khan, John Abraham, Neil Nitin Mukesh, Anu Kapoor, an undisclosed Russian actor and Vivaan Shah. That is an amazing group of actors, don't you think? From the most talented to the most good looking, Piggy Chops has them all in SKM.

sources reveal that the title of Vishal's film may be changed from "Saat Khoon Maaf" to something else. But this film is definitely going to be one to watch out for. It seems to be a truly Bollywood masala film, with love, romance, passion, polyandry, murders, suspense, thrills, and what not!!! What do you think?

It’s a good thing to be married to a good husband: Priyanka Chopra

I have blind faith in Vishal Bhardwaj, says Tabu

Vishal Bhardwaj: Deepika Padukone's upcoming film with irrfan khan is not a biopic

Vishal Bhardwaj: Deepika Padukone is a combination of an actor and a star