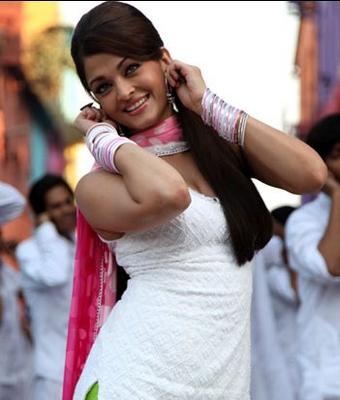 Megastar Amitabh Bachchan wrote on his blog that he and his family would not celebrate Holi this year. The Bachchans may have given Holi a miss this year, but the Bachchan Bahurani has recently shot her first Holi sequence.Holi songs used to be really popular in Hindi cinema a few decades ago. But now we rarely see a Holi song composed for a new Bollywood film.

The song "Jali toh bujhi na kasam se koila ho gayee haan" will be different from any other Holi song you may remember. If you try to visualise ANY Holi song, you would conjecture up images of the hero chasing the heroine with a "pichkari" full of water, and then the heroine would be drenched in water- her white sari colored with various colors of the festival. But Vipul Shah has decided to put paid to this popular image of Holi in Bollywood films. The new Action Replay Holi song will have no such images or scenes. The simple reason is that Vipul is promoting the concept of Dry Holi through his film and song.

In Vipul's words, "We saw no point in wasting 70-80 tankers of water for a three-day shoot, given that Mumbai is facing a water crisis. As a responsible citizen, we chose the dry Holi concept to picturise this Shreya Ghoshal song, penned by Irshad Kamil.” This is what Vipul said when he was asked if he would play a dr holi himself this year, “It’s difficult but I will be this year. I haven’t seen Ash playing Holi but I expect to meet her today. Neha is in Bangkok and I’m not sure if I’ll meet her.” Referring to the lack of Holi songs in modern Bollywood, Vipul said, "My Waqt song became a huge hit. But then, it’s played only during festivals. There’s no fun in shooting a beautiful song that’s played only during festivals. However, the AR song isn’t just a celebration of Holi. One has to wait for the film to release to find out.”

Well, what can we say? When you have gorgeous stars like Aishwarya nd Akshay promoting a dry holi concept in a Vipul Shah film, we have no choice but to sit up and take notice! We'll be waiting Vipul...

How Are You Celebrating Holi This Year?

An Overdose Of Salman?

Some Pics Of On The Sets Of Pukaar

Stars Of Dussehra Shoot A Holi Song For The Film Photos

Holi Flashback with SRK and Gauri

Happy Holi to Everyone!