Big B: Budha With An Attitude! 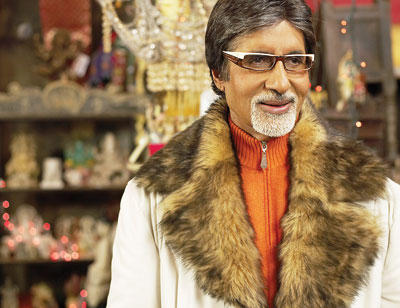 Before people start pelting stones here, Budha, is a part of the new film that Amitabh Bachchan has been signed on to play the lead role in. The film has been titled Budha: Don't F**K With him! Weird? This is the first time that a profanity has "almost" been used in any of Big B's films.

Tamil Director Poori Jagannath is the creative genius behind this venture. This is the same guy who made the super hit Pokiri,, which was later remade by Prabhu Deva as Salman Khan's "Wanted". Poori is known to be an ardent "Big B" fan. He has written the script of this film, keeping in mind Mr. Bachchan. In his own words, "Budha is not a remake of any of my Telugu films. It's an original screenplay written especially for Mr. Bachchan. The challenge was to cast him as a character he hadn't done before. After seeing Paa, I wonder what any director can make him do that's new. I wanted to cast him again as the Angry Young Man I grew up watching in Zanjeer and Deewaar. But the character had to be modified to suit his age. So I thought of a 60-year-old man, who thinks acts and fights like a young man."

It is really amazing that Amitabh Bachchan still inspires writers and film makers to come out with new ideas, challening their own creativity! Kudos to you, Mr. Bachchan. But one small worry, if "Budha" is an action-packed film, will Big B be required to perform any stunts? Poori clarifies that his film will indeed have action sequences. But since the character of Mr. Bachchan is 60 years old, these sequences will be shot keeping that in mind.

Are you still unconvinced about the tagline? Reportedly, the title "Budha: Don't F**K With Him" is the brainwave of Amit ji's favorite director, Ram Gopal Verma. The director, Poori Jagannath, has apparently given his nod to the title because it sounds very apt for his film. Poori says, "Mr. Bachchan's character is actually quite angry and very violent. I've written the role especially for him. It is that of a 60-year old man who refuses to accept his age. Every time someone calls him budha (old man) he flies off the handle."

The plot sounds to be quite interesting and surely many of our memsaabs will draw parallels from their own lives. How many of you have felt angry when addressed as "aunty" by a toddler for the first time? Actually women are the ones who find it a little difficult to accept age and ageing. It would have been really great to watch Poori make his film with a female character in the lead, telling the same story. But women-centric films rarely do well in our country. Really sad!

Ashutosh In Pursuit Of Happyness

Amitabh Bachchan's fans surprised him with a job offer!

50 Years in the film industry of Big B: Abhishek pens emotional note for father Amitabh Bachchan