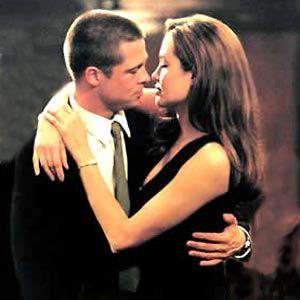 Hollywood's power couple Brad Pitt & Angelina Jolie have filed for seperation, ending their 5 year long romance. The most famous couple in Hollywood, nicknamed Brangelina, has reportedly signed a 205 million pound split deal after consulting with top lawyers. The British paper News of the World has breported that Brad and Angelina have decided to equally share their fortune, as well as the joint custody of their brood.

The paper has reported that though Brad and Angelina will share the joint custody of their children, the kids will live with Angelina. The couple have 6 kids, 3 of whom are adopted. Reports suggest that the couple met with top L.A. lawyers in December, seeking help with dividing their fortune. It is worth a mention that the couple were not legally married.

The London newspaper has quoted an inside source as saying, "The document was signed in early January. Both Brad and Angelina had signed it. It seemed clear they want the world to know they'll both play a part in the upbringing of the
children. But Angelina will actually be the one who lives with them full-time. There's no date for when the contract would come into effect. But the paperwork is already organised for a break- up - and for it to be as unmessy for them as possible. It is clear it's a case of when they break up rather than if."

Rumors of a rift between Brad and Angelina have been doing the rounds for quite some time now. There were reports about Angie being upset about the Brad's relationship with a pretty nanny! But more prominent wee the reports that suggested Brad's inability to break up with ex-wife Jennifer Aniston. Tabloids repeatedly reported that Brad was secretly seeing his ex-wife, and this was a constant bone of contention between Brad and Angelina. Can't blame Angie! After all, who likes a "saut"?

Meanwhile, another close source has been heard saying to the media, "To all intents and purposes their relationship has turned into one of convenience, principally for the kids' sakes. But they still love each other and they will always put the children first so it seems unlikely they will separate any time soon. They would rather just muddle along. They both want to work at things though, and not just turn their backs on five years at the drop of a hat."

But if all these reports are to be believed, then the popular Friends' star "Jennifer Aniston", who was robbed of a husband by Jolie, seems to have the last laugh!

Brangelina are now Man and Wife!

I kissed a girl