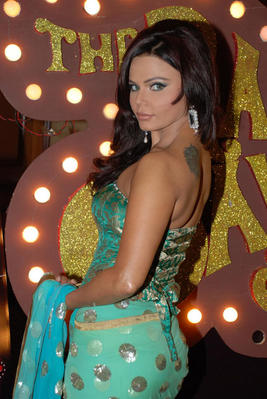 Rakhi Sawant is one babe who will never compromise or take things lying down. We have heard a million complaints about the Censor Board from disgruntled producers and directors. But it takes a Rocky Sawant to challenge the Censor Board and question their intent and capability.

The Censor Board recently took a panga with Rakhi. The Board directed Rakhi Sawant & Ishq Bector to delete or beep out the word ‘kamine’ from the mukhda (opening verse) of ‘Bhoot’ which is the latest video from their album titled ‘Jhagde’. Since this comes only months after the release of last year's big hit Kaminey, it won't take a rocket scientist to know why this has irked the duo so much. So Rakhi and Ishq have sent a show cause notice to the Censor Board.

Rakhi quips in anger, "The censors clearly have double standards. When they can pass an entire film called ‘Kaminey’, what sense does it make to delete the word ‘kamine’ from our video, and that too, without giving us any reason whatsoever?" Singer, lyricist and co-producer Ishq Bector adds, "The mukhda of the song goes ‘Kamine tera bhoot chad gaya re.’ But after the word being bleeped out, our song looks completely disjointed. This has killed its impact and sabotaged our album sales. Apart from the UTV movie by the same name, the word ‘kamine’, having the same interpretation and meaning, has been passed by the Board in umpteen films before."

Adding to the surprise and mystery, the Board has passed "promos" of the afore-mentioned song, without demanding any deletion or beeps of the word "kaminey"! Not surprisingly, Ishq asks, "Does the Censor Board have different norms for films, videos and promos? Or is it that we are being singled out just because we are smaller producers?"

Rakhi is going to town accusing the Censor Board of being unjust, unfair and biased. She also alleges that the office bearers of the Board are making a mockery of morality by passing prejudicial judgments. Rakhi and Ishq's lawyer Rizwan Siddiquee says, "No act of commission or omission on the part of the Censor Board, or any officer representing it, should be arbitrary, unjust or in manner be biased or sexist. The Board needs to fully understand that its acts could willfully prejudice the fundamental rights of an aggrieved party and therefore it should act accordingly."

This is not the first or the last time that the Censor Board officials have passed a judgment that smacks of very obvious prejudice. But Rakhi and Ishq have surprised everyone by questioning the Board's decision. Way to go guys!