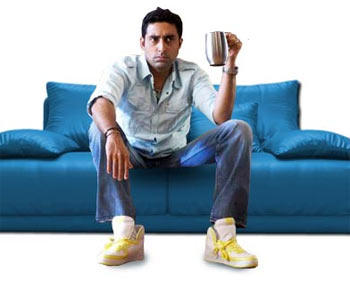 Are you wondering about all those hoardings and advertisements about Abhishek Bachchan’s “Aaraam Classes”? Don’t be surprised. This is yet another reality show, albeit with a revolutionary new concept. This is a show that celebrates laziness. Yes, a show that will measure the laziness quotient of contestants. Not quite what you would expect, right?

Colors has planned to telecast “Saturday Night Bingo” in the slot that will be vacated by Bigg Boss 3 tonight. So all you Bigg Boss fans have nothing to worry about because yet another reality show is coming to entertain you. You will definitely not miss the Bigg Boss inmates on TV because the laziness will continue with Abhishek’s Aaraam classes.

Do you like the choice of Abhishek Bachchan as a host for Saturday Night Bingo? Though Abhishek does come across as a lazy slob himself, can he carry a reality show on his lazy shoulders? Abhishek does have his share of witty humour and effortless charm. But his popularity is nowhere close to the biggies like Paa - Big B, SRK or Salman. Yet the concept of the show is so unique that it just might click with the audience, especially the youth.

With reality television coming of age on Indian Television, all our Bollywood celebrities are flocking to the small screen to get a share of the pie. Senior Bachchan is already a veteran in the world of reality television having been the first host of KBC, the pioneer of reality shows in India. No wonder he wants to pass on the baton to his son. Whether Abhishek’s stint on television will be as Aaraamdaar, only time will tell!