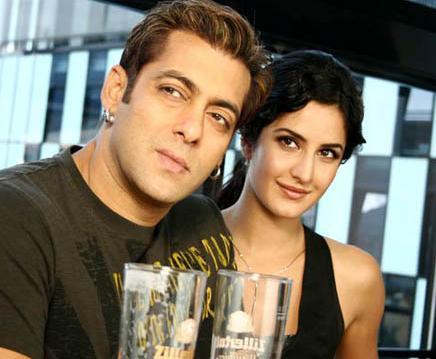 The media is abuzz with stories of an alleged romance brewing between Katrina Kaif & Ranbir Kapoor. It has been reported in a leading afternoon daily that the two are romantically involved. There's also some talk about a heart shaped pendant gifted from Ranbir to Katrina and a constant exchange of phone calls and SMSes between the two. Katrina has also been reported to have visited the Kapoor residence to meet with Ranbir's parents. What's more, Ranbir has recently broken up with Deepika Padukone, adding fuel to the fire.

It all started with the shooting of Ajab Prem Ki Gazab Kahani. Linking of two costars is nothing new for the media to do. So it wasn't very surprising when these stories began to appear on various websites and blogs. But when Mid-Day published a story about this new romantic jodi, it has come as a surprise to many. Meanwhile, Katrina's spokesperson has declared that Kat is unwell and hospitalized. She is attended by Salma Khan, Salman's mother, and his sisters in the hospital. Katrina's spokesperson also clarifies that there has been no exchange of gifts between Katrina and Ranbir, nor has Katrina ever visited his home or met him after the release of their hit film APKGK.

All Salman's fans are worried about their idol once again losing in love! Salman is famous for having been ditched by multiple girlfriends after they have used him to get a foothold in the film industry. We almost feel sorry for Salman Bhai. It is a little surprising that such gossip has cropped up soon after Salman has come clean about his relationship with Katrina.

Is this just the gossip mill churning out stories of link ups? Or has Katrina really dumped Salman due to his alleged interference in her career and possessiveness? Do you think that Ranbir-Katrina affair is the reason for Ranbir-Depika breakup? What do you think is the deal with Salman Khan and Katrina Kaif? Are they a couple or aren't they? Please share your views in the comments section below.

Did Salman Lose His Job To Ranbir?

Katrina Kaif opens up on break up with Ranbir Kapoor; says it wasn't in her control

Bharat poster no 4: Salman Khan-Katrina Kaif set to give patriotic feel in his next

Ranbir Kapoor and Katrina Kaif are back to being a couple

Here's what Kareena Kapoor said when asked about Ranbir-Katrina split