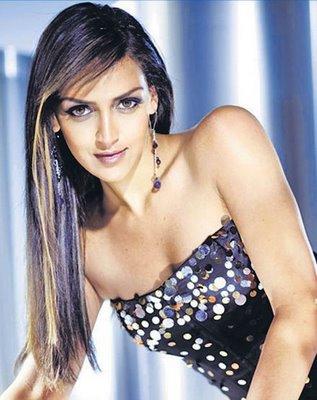 Like all parents, Hema Malini wants to see her daughter achieve the success and fame that has been eluding her for years. Esha Deol has been missing from the Bollywood circuit, films, parties and gossip for so long that people started wondering if she was still around in B-town! But this about to change, dearies. Mommy Hema has launched her home production film that is being touted as Esha's comeback vehicle.

Tell Me Oh Khuda is Hema's second production. Her first was Dil Aashna Hai starring the King Khan in his pre-stardom days. Director Mayur Puri says that TMOK is similar to DAH as far as the theme goes. Both the films are about a quest. While we know that DAH was about finding a father, we wonder if TMOK is about finding a long lost mother!

Reportedly 4 different cinematographers have been hired to shoot 4 parts of the film to give a distinct feel and look to each one. Esha Deol, who turned sexy with her bikini act in Dhoom, is trying to lose weight for her mom's film. Though Esha is slim and svelte as always, she feels that this film requires her to look more toned and shapely than ever. She says, "Rocky S is styling me in Tell Me Oh Khuda. To get into those cool clothes, I have to flaunt an extremely taut body. But it is not that I am going to become reed thin; just that I have to be in ship-shape. As preparation for Tell Me Oh Khuda, I have stopped doing weights and am sticking to cardio. Weights give that bulky look which I don't want for this project. And I have always been a careful eater."

So you can expect to see a lot of oomph and sizzle on the screen when Hema ji's "Tell Me Oh Khuda" releases. The movie has been launched on November 2, which is incidentally Esha's birthday. Looks like mommy dearest has gifted this comeback to Esha on her birthday. Let us see if she can make it work. Will the dreamgirl be able to fulfill all the dreams of her daughter? Will it be second time lucky for Esha? Just wait for a couple of months, and you will find out...

Guess Who's Having a Little Sister?

This Diwali…Rival on Silver Screen !!!

Hema,Karisma,Esha At The Launch Of Pune Festival 2014