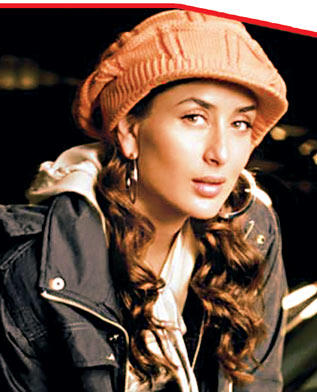 It seems that the “size zero” gal needs a little luck these days. Kareena Kapoor has delivered yet another flop film last week. Kurbaan, starring Saif Ali Khan-Kareena Kapoor is a film that was said to be close to the couple’s hearts. A lot of hype was created about their on screen chemistry in the film. A sizzling “seemingly” nude poster was plastered all over the country to create interest in the film. The PR guys gave the impression that Saif and Kareena’s steamy sex scenes would be the USP of the film. But alas! None of this publicizing could work any wonders for Kurbaan.

It’s official. Kurbaan has failed to make any waves at the box office. The critics have given a mixed response to the film. A few have called it “powerful cinema”, and a few have trashed it completely. But the box office seems to have given Kurbaan a complete thumbs down. Reportedly, the film grossed around Rs. 4 crore on the first day of its release. This is by no means good enough for a “Saif-Kareena” starrer. Sadly, the collections dipped further on Saturday and Sunday was even worse. Reports say that Kurbaan has done a business of Rs. 15.75 crore in the first 4 days of its release. It is expected that the film will total collections worth Rs. 30 crore approximately.

Interestingly this is the first time that a Karan Johar film has bombed at the box office. On the other hand, UTV has had hard luck all this year and Kurbaan is just another addition to their list of flops.

This is the 4th flop in a row for actress Kareena Kapoor. After hogging the limelight for Jab We Met last year, this year has been rather uninspiring for Bebo. Her size zero act in Tashan could not change the sad fate of the film, in spite of the huge media focus on Bebo’s new body. Next was Kambhakht Ishq with Akshay Kumar, which bombed at the box office quite miserably. Main Aur Mrs Khanna never generated much hype, and went down without making any noise. Now Kurbaan seems to be headed towards similar fate. The only saving grace for Bebo in 2009 is Golmaal Returns, which was a good hit. But since it was a multi starrer film, Kareena cannot really walk away with all the credit.

All in all, 2009 has been rather dreary for Kareena. Though she still commands a good price in Bollywood, flops are bound to run her down sooner or later. Kareena is doing well in the endorsements area and has a couple of prestigious films under her sleeve. But what is the reason for her failing luck at the box office? Are the scripts to blame? Or has the public had enough with this size zero babe?

We hope Kareena will witness a turnaround before the year ends. After all, Raju Hirani’s “3 Idiots” is ready for release. Considering that it is a Raju Hirani film and has Aamir Khan playing one of the lead roles, this film just has to be a super hit! So it seems that there is still a little hope left for Kareena in 2009!

Kareena In SRK’s Next?

'I get paid well even after a flop', says Nawazuddin Siddiqui

Kareena: I am the only B-town A-lister to get a career and a marriage going on full-fledged

Kareena Kapoor and Ajay Devgan get locked for 'Golmaal 4'

Finally: Sonam’s next project has been announced, it also stars Kareena and Swara

Hottest Couple At The Moment Spotted At A Promotional Event

Kareena Kapoor Khan On The Sets Of Happy Ending