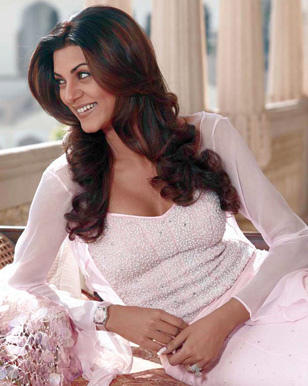 People have been cracking jokes about Sushmita Sen’s bulky figure in these times of “Size Zero”. But hey, a few extra kilos is no reason to write off a big star like Sush, who is India’s first Miss Universe.

But if you still prefer a thinner Sush, you’ll be glad to know that the Diva has lost 8 kilos of weight and is back to her svelte slim self. Now Sushmita is not just following a fad by losing weight. As the lovely actress shares with the media, she was asked to gain weight for her role in Do Knot Disturb, in which she plays Govinda’s wife.. Director David Dhawan had asked her to put on 14 kilos for this role. But since she felt that 14 kilos would be difficult to lose, Sushmita agreed to put on 9 kilos.

Talking about her “weighty” issues, Sush says, “I was asked to put on 14 kg but I told Vashu-ji and David 'I don't think it'll be easy for me to lose that much; so let's not attempt putting it on. Finally I put on nine kilos, but then I had a month and a half to lose it, as I had to go back and shoot for 'Dulha Mil Gaya' after that. But losing it was definitely a difficult task, as it required a lot of discipline. I had to stick to two-hourly eating and had to manage a workout regime. I had a very good trainer, Mupur Shikhare, and a wonderful dietician, Pooja Makhija; so these guys handled it for me and I was back on track.”

When asked about her reaction to the many popular jokes about her being fat, a mature Sush retorted, “I don’t react to things. Quite frankly, I would have liked Vashuji or David to speak up for me at that time. But I guess they had their own reasons. It’s fine now, people know that all my weight gain was for the film.”

Sushmita weighs 59 kilos and has reportedly lost 8 kilos in 6 weeks. You probably want to know her secret, right? Sush says, “It took me about one and a half months to get back to my original shape. I was on a strict diet. I used to eat in parts and drank a lot of ugly looking vegetable juices. I completely stopped eating carbs after 7pm. It was not just a protein diet but a well-balanced one with a healthy mix of protein and carbs. I also did some serious training during that period. Discipline and diet control made it all possible.”

Sushmita will be seen in Big Pictures & Vashu Bhagnani’s “Do Knot Disturb”, paired with Govinda. Sushmita, David and Govinda have already worked together in Kyunki Mai Jhooth Nahi Bolta. Sush has also given two hit comedies with Salman and David, ”Biwi No.1” and “Maine Pyaar Kyun Kiya”. After Do Knot Disturb, Sushmita’s next release will be Dulha Mil Gaya with SRK. She is also working with Hollywood star Ben Kingsley in Teen Patti.

Losing weight, it seems, is only one of the many good things lined up for Suhmita Sen in near future!

Guess Who's Getting Married?

Why Do Diets Fail?

Arshad Warsi loses 6 kilos: was on a very strict diet for one month

Kangana Ranaut to pack in 10 kilos for her next film

Dia,Sushmita and Sheena at I AM She 2012 Auditions

Sushmita Sen and Other Celebs at I AM She Press Meet

Lose 30 Kilos in 3 Months With Babaji

Lose Weight in One Week!