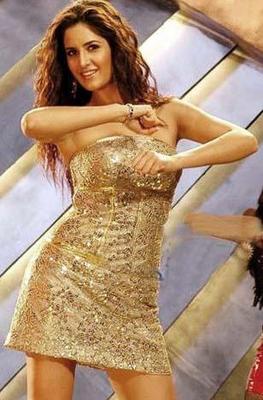 He’s not a crazy fan, and he’s not a fanatic fundamentalist. (S)He’s not even a feminist who is upset with Katrina Kaif’s skimpy clothes. In fact he’s none other than her boyfriend Salman Khan!

We have heard Katrina Kaif often say in interviews that Salman doesn’t watch her films. In a candid interview with Bollywood critic Rajeev Masand, Sallu miyan reveals why. He frankly admits that he is not comfortable with his girlfriend wearing short skirts or revealing tops. He says, “Once I saw she was wearing a really small skirt and I didn't like it. But then you have to sometimes chill and let it go...it's better to stay away from those things.” He further adds that all the saucy scenes are shown in a film’s promo. He finds it hard to avoid watching the trailers, but sees no fun in subjecting himself to the complete film.

So now you know why Salman doesn’t watch Kat’s films. But did you know that this “possessiveness” is also the reason why Salman has not been able to settle down? In this interview, Salman confessed that he has always faced the same problem with all his girlfriends from the industry. He also added that he avoids visiting Katrina’s sets because he has been labeled aggressive boyfriend” in the past because of such things. So now he does not wish to come across as a jealous boyfriend who snoops on his girlfriend.

Most men would sympathize with Salman and his predicament over having to put up with his girlfriend’s skimpy clothes. But isn’t it akin to hypocrisy? As long as the actress is not your girlfriend, you have no qualms about short skirts and revealing blouses. But if she’s your girlfriend, you’d want to keep her hidden away from the world? And hey, if you can dump your shirt and flex those bare muscles for the swooning delight of your female fans, how can you object to your girlfriend’s short skirts? This once again proves that Indian men have a lot of growing up to do yet!

Interestingly, Salman mentioned that he is on good terms with all his ex-girlfriends, except one. No prizes for guessing who this one is!

How To Be A Good Girlfriend

Half Girlfriend’ is not delayed: Arjun Kapoor revealed

Is Salman Khan Engaged To Lulia?