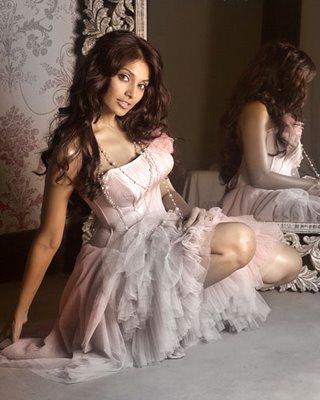 After Shilpa Shetty and Mallika Sherawat, it is the dusky Bong babe who’s all set to make a mark for herself internationally. Bollywood is abuzz with reports that Bipasha Basu has been approached by a British TV Channel to appear as a celebrity judge on a popular Reality Show.

Though Bips or her publicist have not yet made an announcement, the inudtsry is abuzz with the new of her having gone to London to discuss the deal. Bipasha will obviously make a public announcement when the deal is finally put on paper. You are probably thinking that Indian babes are going places internationally. There is some truth in that. But the bigger truth is that it makes “money” sense for the channel to get an Indian actress on board. This ensures that they get viewership in Indian/Asian community as well. Knowing that Asians form a large chunk of audience in UK, the channels cannot afford to ignore them. Yes, it’s all about money, honey!

This is not the first time that an Indian actress will be seen on British TV. Memories of Shilpa Shetty winning the Big Brother-UK are still fresh in our minds. Big Brother unquestioningly gave Shilpa’s career a new lease of life. Will Bips also gain from this international exposure as much as Shilpa did?

Back home, Bipasha Basu is all set to make an appearance on the TV with a brand new reality show. An Indian channel has bought the rights to hit American show America’s Next Top Model. SRK’s Red Chillies Entertainment is producing the desi version of this show and Bips has been chosen to play a huge part in the show like Tyra Banks.

So the Bong bombshell has a lot lined up her sleeve. We wonder if she’ll have time for hunky boyfriend John amidst all this work!

The Kapil Sharma Show to now move to Salman Khan’s own channel?

Bipasha Basu At An Event In Detroit USA

Celebs At The Zee Risthey Awards 2012