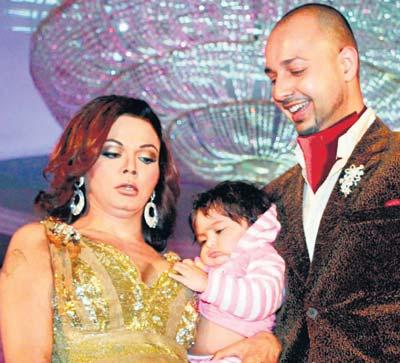 The Reality Queen of Indian Telivision is all set to be back!

NDTV Imagine has struck a pot of gold with Rakhi Ka Swayamvar, and the channel wallas are too smart to let go of this “sone eke ande dene wali murgi”. So the channel has announced a new reality show called “Pati, Patni Aur Woh”. PPAW is the desi version of a popular international show called Baby Borrowers.

But all this will not take 15 or so years, like it does for real parents. Our celebrity couples will sail through all these stages in the matter of a few weeks! The show will have over 20 episodes in all, but there will be no eliminations. This is not a win-lose show. The concept is just about grooming the couples for real life parenthood. The couples will be expected to juggle their parenthood along with other real life tasks like entertaining guests, picnics, having the in laws over, going to parties, homework etc.

So who else will be there on the show?

Shilpa Shetty on choosing surrogacy: I had a couple of miscarriages; waited for second child for five years

Priyanka Chopra: Nick listens to Bollywood music before going on stage for his shows

Ranveer Singh: Things what Big B said on stage made my heart glow

Shahid And Alia Launched The First Song Gulaabo From Shaandaar

SRK,Priyanka And Jacqueline Performs At Got Talent World Stage Live

Priyamvada and Shrey Talk About Splitsvilla