"My Name Is Khan" Goes Global 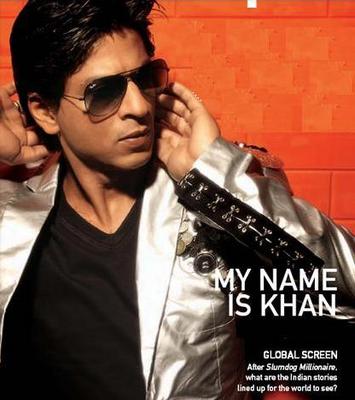 Though SRK and KJo did not reveal the numbers in their press conference, industry is abuzz with news that the deal has been finalized at Rs. 98 crores, highest ever for a Bollywood film. This is the second time that Fox Star Studios has aligned with a film of Indian background. Everyone knows what a huge success they made out of Danny Boyle’s “Slumdog Millionaire”!

So why exactly is Fox interest in MNIK? “After the narration we got from Khan and Johar we were confident that this has the ability to be a global film. We want to make good films across all borders and there could have been no better project in India that we could have associated with”, says Stanford Panitch, President Fox International.

The film revolves around the story of an Indian Muslim living in San Francisco, who suffers from Asperger's Disease (a rare autistic condition in which the patient cannot form proper social interactions, lacks empathy for others and may be clumsy). SRK plays this character and is cast opposite his favorite heroine Kajol. Together SRK, Kajol and Karan Johar form the most successful team in Bollywood. It’s not for nothing that “SRK-Kajol” pair is voted the Best Bollywood Jodi, year after year!

Karan Johar, who is co-producing the film along with SRK, is also directing it. A few years ago, Dharma Productions films were distributed by Yashraj Studios, but recently Karan has switched loyalty to UTV. So why this sudden switch to Fox? Karan says, “Because the subject of the film is so universal we want to make sure that it can reach people across the world. Fox has that capacity and we’re so glad that they are helping us.”

It seems that SRK and KJo are eyeing international awards and honors for MNIK. If Aamir does it, Hritik is doing it, why can’t the Badshah of Bollywood? MNIK is creating a lot of buzz in the industry, media and audience. Everyone is waiting for the film to release. We just hope it delivers what it promises.

Wrath Before Release Of Khan!

The Vegetarian Indian Cowboy Is Back!

Akshay Kumar's turn to be the silver fox

Raaz 3 Team At The Screen Office,Fox Office and Lokmat Office