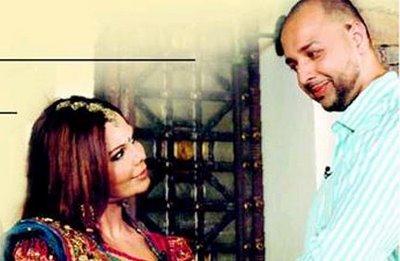 Rakhi Sawant got engaged to Elesh Parujanwala in a glittering ceremony yesterday, attended by the Who’s Who of Indian TV industry.

NDTV Imagine, the broadcaster of the biggest Reality Show on Indian telly, received applications from thousands of prospective grooms when the show was announced. The show started after the producers shortlisted 16 contestants, who were given a chance to impress Rakhi with their antics.

The prospective grooms cleared hurdles and performed various tasks to prove their mettle in the marriage market. Initially Luv, Manmohan and Elesh seemed to be Rakhi’s favorites. But Mr. Luv ruined his chances by becoming the “Serial Kisser” on the show. Looks like he has been watching too much of Emraan Hashmi, right? On the other hand, Manmohan ji from Rishikesh didn’t have to do anything to ruin his chances. His “typical Indian Mother-in-Law” mom was enough to wreck all his chances. From demanding a “ghoonghat” to informing Rakhi that she would forgive Rakhi’s past, if she could wrap up her filmi career…..ohhh! How could Rakhi tolerate so much interference from a merely “prospective” mom-in-law? Good decision Rakhi!

So finally, Elesh, Manas and Shitiz emerged as the 3 finalists. Rakhi met their families and even visited their homes to understand them better. After functions like Mehandi & Sangeet, August 2 was the D-Day for the final Swayamvar.

After hailing Lord Jesus with a solemn prayer, Rakhi took a few potshots at the media before doing the honors. She playfully passed over each groom twice and then coming to centrestage, she announced “Actually, I have decided to do a Swayamvar Part 2”. Are you paying attention, journos? Later, Rakhi garlanded her dulha Elesh Parujanwala and said many nice things about him, apart from telling him that she loved her. Rings were exchanged and so were vows. It was truly a fairytale like affair.

There is something about this daring gal, Rakhi. People love to hate her. So even though everyone is hooked to the show, few have the galls to admit it. Statistics show that the TRPs were awesome and the show was quite popular. After all, how many times do you get to see a girl choose her partner on TV?

Meanwhile, Elesh remains everyone’s favorite, making Rakhi’s decision widely accepted by audiences. Elesh, who is setting up a business in Mumbai, plans to spend 6 months in Mumbai every year, and 6 in Toronto. So Rakhi can have the best of both the worlds. If you are wondering why Elesh scored over the “Indian” Indians, it is quite simple. He really is the best. Elesh has everything going for him. He’s rich, well settled, good looking, extremely romantic, and a really decent guy. What’s more, he has a great family. The whole family comes cross as very broad minded, decent and positive. We wish Rakhi and Elesh all the best. We hope they get married soon, and live happily ever after.