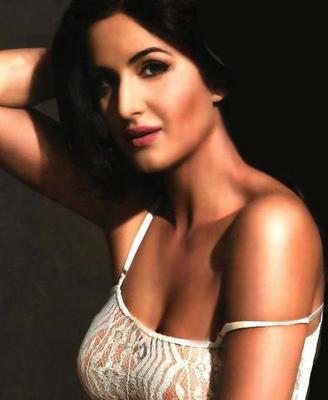 Katrina Kaif is dubbing for Raj Kumar Santoshi’s “Ajab Prem Ki Gajab Kahaani” these days. She says it’s the hardest thing she’s ever had to do! Now, aren’t you thinking just how difficult can it be to mouth a few dialogues?

Let us enlighten you. In the dubbing studio, the actor/dubbing artist has to speak out all the dialogues without compromising on the emotion and tone. It’s not very easy. But still, if all these Khan and Kapoor kids can do it, it can’t be that difficult either, Right? Kat disagrees. For a woman who has spent the better part of her life in Britain, getting the accent right is not easy. Everyone knows that Katrina Kaif has used the services of a professional dubbing artist in most of her movies.

But now, Kat has to deliver the dubbing performance on her own in this Raj Kumar Santoshi film. Santoshi is known to be a stickler for his actor’s tone and diction. So Kat has been practicing her Hindi feverishly.

Meanwhile Katrina is busy promoting her “YRF” New York, which releases this week. She has been involved in a lot of promotional campaigns along with costars John Abraham and Neil Nitin Mukesh. Here’s what Kat says about her experience of working on this film, “When I landed on the sets of the film on the first day I felt that I was a misfit here. The success of Singh Is King was still hovering over my head. I had done hardcore commercial ventures and here I was on a film that was entirely different from what I had done before. Gradually working with Kabir, John, Neil and Irrfan became so comfortable that I did not want to leave the sets and go back home. I have never been to college in my life since I started working at the age of 17 I had to pay my rent and take my financial responsibilities. Here I had all the fun that University kids have while studying. I was there on the sets with not much make up and simple clothes. The film really took me by surprise.”

So Kat has never been to college. Now we are surprised! Anyway, here’s wishing the lovely lady all the success for her next release.

Aamir Khan Snapped While Dubbing For His Film