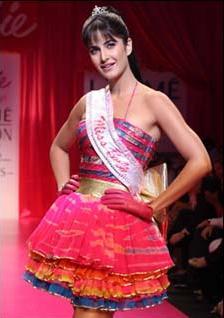 Katrina Kaif has been making waves ever since she hooked up with Akshay Kumar for her second innings in Bollywood. Few people remember her debut film Boom which failed to boom at the box office. Kat has come a long way since then. She has been voted the “sexiest Indian woman” in various polls. She is also the “most downloaded face on the internet”.

The latest feather in Katrina’s cap is that the famous Barbie Doll will now have Katrina’s face. This is the first time that Barbie will have the face of an Indian and we are all so proud. Initially it was reported that “Katrina” Barbie Doll is the Indian version of the international doll. But Kat clears up the confusions. Her face is not only for the Barbie in India.

In her own words, “Contrary to what people believe my Barbie is not an Indian counterpart of the international brand. It's an honor because I'm the first Indian to be the face of Barbie. I'll be dressed the way the Barbie is all over the world. And I think in many ways it's an endorsement of how kids connect with me. You can't be the face of an international doll unless kids like you. I like that. The thought that kids like me enough to make me a part of their doll collection is very gratifying.”

The Barbie connection comes at a time when Kat has herself said in various interviews that she wants to experiment with different characters now. On one hand Kat is trying to break free of the sweet Miss Goody Two Shoes image of hers. On the other hand, she will now be immortalized as a sweet Barbie doll. What an irony!!!

But don’t you fans worry much about your Kat. She is going to shock you out of your “sweet” dreams with her politician act in Rajniti. We hear that Katrina is delivering some really solid speeches in Hindi for her “neta” act. We bet there’ll be nothing sweet-doll like in Kat’s “Rajniti”.

How to Say NO to Your Little Children