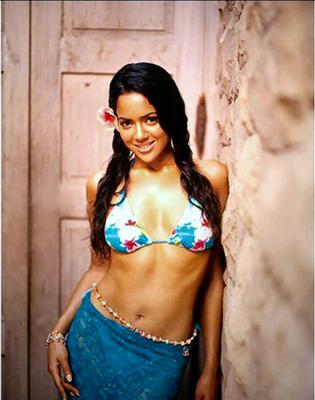 Kareena started it and all Bollywood babes are now fixated at the elusive “Size Zero figure”. While actresses like Rani Mukherjee are reportedly sweating it out in gyms just to revive their career, Size Zero has not spared our sex bombs either!

Sameera Reddy, better known for her voluptuous sexy figure has gone in for a complete makeover. The lovely lady will now be seen in a much thinner avatar. But Sameera claims that the weight loss has nothing to do with the current tread of wafer thin bodies. In fact, Sameera has lost oodles of weight for a specific role in a film she’s working on. Now doesn’t that remind you of hot shots like Shahrukh, Aamir or Hritik? Since when did non actors like Ms. Reddy start taking their acting careers so seriously?

This happened since Sameera was signed by Nagesh Kukunoor. The famous director signed Ms. Reddy for his project ”Yeh Hausla”. Yes, the title does come from a song from one of his films titled ”Dor”.

In Sameera’s words, “Nagesh wanted me to lose a lot of weight for the role of a grass cutting Rajasthani woman. My slightly bulky frame wouldn’t have fit the character of a poor woman.
Though there was not much pressure from him about arriving at a particular weight, I ended up losing almost 7 kilos. See my weight in general showed on my frame and he wanted me to have that thin look but it worked in my favor because most of the heroines have that thin look nowadays.”

Sameera claims that though she does not believe in the concept of Size Zero, she likes herself in her new avatar. She has been working out religiously and is careful about what she eats. After getting this great break with Nagesh, Sameera does not want to take any chances by gaining weight! The film, we hear, is almost complete. We hope Sameera’s Hausla does well at the box office, and also that the weight loss pays off!

Why Do Diets Fail?

Kareena Kapoor: As Thin As It Gets

Lose Weight With These Tips

Get Healthy With This Recipe!