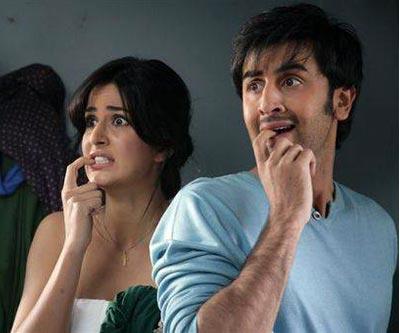 Ajab Prem Ki Ghazab Kahani is one of the most awaited films of 2009. it is a Rajkumar Santoshi film for starters. The man who have given us classics like Andaz Apna Apna and Ghayal is trying his hand at the genre of romance for the first time. He has written the story himself, along with R.D. Tailang.

If the “Santoshi” tag isn’t attractive enough for you, surely the cast will fetch you to the theatres. Ranbir Kapoor & Katrina Kaif will be seen together on screen for the first time. Don’t they make such an attractive couple? Ranbir is so urbane and cool, he’d look great with anyone! The same thing applies to Kat as well.

Now it is being rumored that APKGK has been inspired by late Raj Kapoor, who is incidentally Ranbir’s grandfather as well. If you are a true Bollywood junkie, you surely remember the film that almost took Raj Kapoor to the cleaners? Mera Naam Joker, which was the debut vehicle of Rishi Kapoor, took 6 years to make. It was said to be inspired from the great film maker’s own life. But the film bombed big time!

So there’s nothing too intense in “APKGK”. The movie will not tax your brains. It’s supposed to be a sweet romantic comedy with a great surprise towards the end. Now what could that surprise be? Salman Khan, in a cameo! There’s your surprise. Of course you can’t call it that anymore, can you?

But it’s really surprising that Sallu miyan is still getting cameo offers. We were under the impression that big stars who were unobtainable for the main cast of the film, (but were “good friends”) got invited for cameos, to add some boom factor to a film. Looks like this definitions isn’t exactly correct…

Mistakes You Make In A Relationship (II)

Abhishek Kapoor: Sara is going to surprise everybody

Harshvardhan: If Mirzya takes a massive start at the box office, I will be very surprised

A Watermelon You Can Gift To Your Beloved!