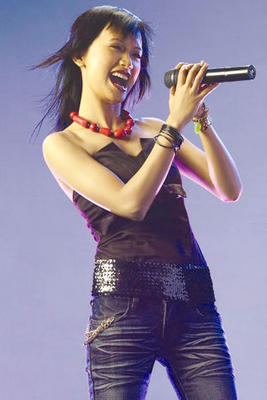 Finally, we get our first “Female” Indian Idol!

Last night, everyone, who is remotely interested in music or television, was glued to the TV screen. It was the finale of Indian Idol 4. It was a close battle between the winner Sourabhee Debbarma, Bengali girl Torsha Sarkar and the young soldier Kapil Thapa. Since two of the finalists were girls, it was expected that the winner would be a girl this time.

Sourabhee is from the North Eastern state of Tripura. She is the first girl to have won a singing talent show in India. Winning the Indian Idol contest is like a dream come true for this cheerful and bubbly girl. She walked away with a Rs.10 million contract with Sony TV, a car and a trophy after beating her fellow contestants. She even got a congratulatory gift from Sonali Bendre in the form of a branded watch.

As expected, the grand finale of “Indian Idol 4” was used to promote an upcoming film also. John Abraham, Katrina Kaif and Neil Nitin Mukesh, the cast of New York were present at the event to add glamour and do some film promotion. Interestingly, John had been present at the finale of Indian Idol 3 also, along with girlfriend Bipasha Basu, to promote their film Goal.

It has taken 4 long years for a girl to emerge as winner of this reality show. Sourabhee is really very talented and lucky. After all, to win a contest based on public voting is no mean task in our country, for a girl. Didn’t someone say something like, “To succeed, women need to be twice as deserving and twice as lucky as the men”? Looks like Saurabhee fits the bill. Memsaab Congratulates Saurabhee on her win, and we hope that this is just a beginning for the girl power in India.

Things We Lie About!