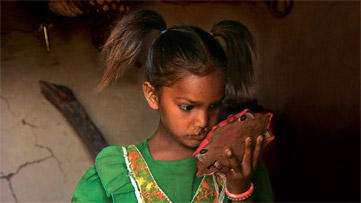 As the country goes gaga over A.R. Rahman’s 3 Oscar nominations this year, here is another Oscar nominee who is not known to many.

Pinki is not an actor. She’s not even a director or a musician. She’s just a little girl who plays herself in a documentary film titled “Smile Pinki”. The documentary films which runs for 39 minutes has been made by Emmy nominated film maker Megan Mylan. Interestingly, Smile Pinki was nominated for an Oscar Award right in October last year.

“Smile Pinki” is the story of 8 year old Pinki who does not go to school. She lives the life of a social outcast, just like “Ghutaru”. The reason is a cleft lip, which both the children were born with. The cleft lips can easily be fixed with a surgery. But the kids belong to such poor families that surgery is out of question.

One day, a social worker “Pankaj” visits their village. Pankaj is associated with the G S Memorial Hospital in Varanasi, which provides this surgery, free of cost, to thousands of patients every year. Dr. Subodh Kumar Singh performs the surgery on Pinki. Dr. Singh is the Project Director of the “Smile Train” that provides free surgery to poor children.

The 39 minute long documentary is a heady mix of emotions that can easily bring tears to your eyes. Pinki is nominated for an Oscar this year. With help of social workers, she has made concrete plans to appear at the Oscar ceremony. Accompanied by her father, Pinki (who has never ventured out of her state UP) will now make the trip to USA.

We wish the team of “Smile Pinki” the best of luck. And we salute the minds behind the “Smile Train Project”.

India Shines At The Oscars

No Oscar For Aamir Khan!

Deepika: I won't be attending the Oscars

Best and Worst Dressed at Oscars 2010