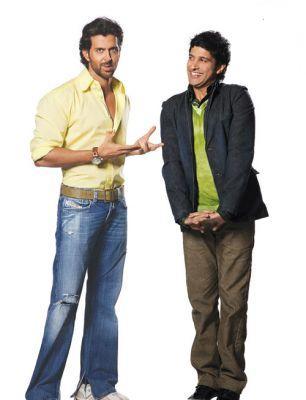 That’s what Farhan Akhtar is busy telling everyone these days. That’s the name of his new TV show where he will be seen grilling celebrities. Farhan’s chat show makes it’s debut tomorrow on NDTV Imagine at 10 PM. Not surprisingly, Farhan has had close buddy Hritik Roshan to appear in the first episode.

So get ready to watch Farhan and Hritik talk about some interesting facts about the latter’s life. A little birdie tells us that Hritik will reveal details about his relationship with wife Suzzane, his meeting with pop icon Michael Jackson and his adventures in Bora Bora. You don’t want to miss all that, do you?

From a film director to TV show judge (Nach Baliye) to actor to singer to chat show host…is there anything that Farhan plans to leave for the others? Farhan surprised everyone with a rocking performance in Rock On!, one of the biggest hits of the year. This guy can not only direct, but can also act and sing!!! Plus, he has that whacky sense of humor. If Farhan Akhtar is not the perfect recipe for entertainment, then what/who is???

Big B, Deepika,Ranveer And Farhan On The Front Row

Dhanush Keen To Work With Hritik