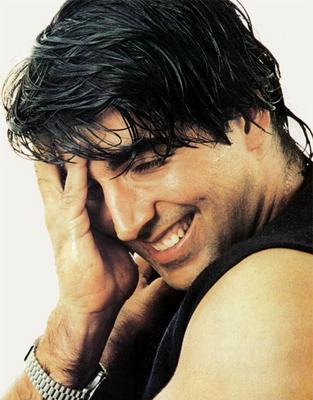 While economists the world over are busy giving their predictions about the economic fates of different countries, there is this guy who is completely oblivious to any economic slowdown. While the “aam junta” is grappling with mounting expenses and the urge to pull out their hair, this guy doesn’t even blink!

This is Akshay Kumar. He has delivered at least 6 back to back hits, with Tashan being his only flopster in recent times. He is the busiest actor in Bollywood, and undeniably, the most successful as well. He is hosting a popular reality TV series on the Number 1 channel Colors, and he is often seen promoting his films in other reality shows. That’s Akshay for you.

So he’s busy, what’s the big deal about it? Isn’t that what you are thinking right now? Well, the big deal is that Akshay Kumar is somehow completely insulated from the global economic slowdown. The recession has certainly hit producers and actors in Bollywood, just like it has affected the TV industry. But how come Akki is still minting money?

Not only is Akshay famous for being the busiest actor, he is also well known for his multi-crore deals that he is quite secretive about. Recently, Akshay dubbed for the animated film Jumbo, which he has been busy promoting. Insiders tell us that he demanded Rs. 9 crore as the fee for lending his voice, and made sure that he got the money BEFORE going to the recording studio!!! Now that’s called “being in a position to bargain”.

With his success rate at the box office, and his ever growing popularity amongst the masses, Khilaadi Kumar is considered a safe bet by the producers lining up outside his gates. This is what works for him and gets him whatever price he asks for…no negotiations!!!

From Action Kumar To Dr. Kumar!

The Handsome, The Daring, The Macho & The Expensive

Singer B Praak: Akshay Kumar arrives in my life like a god

Akshay Kumar At The ICC Champions Trophy India Vs Pakistan