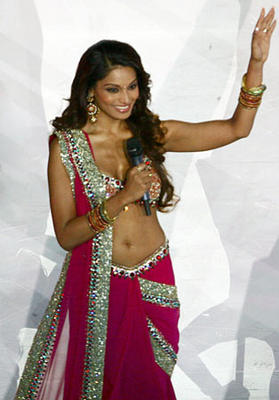 New Year’s Eve is approaching, and this is the time when our Bollywood babes get to make the rules. The simple reason is that 5 Star hotels and resorts vie to book hot Bollywood chicks for their celebrations of the New Year’s evening. As you already know, one performance by a Bollywood heroine can help the hotel in attracting hordes of the rich & mighty!

Most of the hotels have already booked their “queen dancers for the evening”. You will be shocked to know the insane amount of money that Bollywood bombshells are demanding for making an appearance!

Riding high on her two hits this year (“Race” & “Bachna Ae Haseeno”), Bipasha Basu is topping the list. The Bong bombshell has been signed by Sahara Star in Juhu, Mumbai for a whopping Rs. 1.5 crore!!! Do you realize what that means? If Bips dances for 30 minutes on 31st Dec, 2008, she will be paid Rs 5 lakh for each of those 30 minutes!!! Those must be some thumkas, right?

Next in line is Katrina Kaif, who has also given a series of hits in Bollywood. Kat has been roped in by J.W. Mariott for a price of Rs. 1 crore. Last year, the same hotel had paid Bips Rs 90 lakh for her performance on the New Year’s Eve party. But considering that Bips has raised her price by Rs 60 lakh, probably Mariott could not afford her anymore!

Not to be left behind, item girls are also quite hot on the “New Year Party” circuit. It has been reported that Rakhi Sawant, the item queen, has been roped in to perform for an international audience this year. The organizers have hired her for a price of Rs. 40 lakh. The exact venue is not known, but it will be either Dubai or Bangkok.

Next comes the “chaiyya chaiyya” girl, Malaika Arora Khan. Malaika has been hired by a 5 Star hotel in Singapore, for an undisclosed amount. It has been reported that the amount is a little less than what Rakhi is being paid. Probably this is the reason why Malaika won’t disclose it!

New Year’s Eve brings a smile to many faces. Out-of-work actresses also find a reason to cheer this evening as “sometimes” they also get pricey offers. Neha Dhupia and Ameesha Patel have been hired by hotels for a price of Rs. 25 lakh each. What a great way to celebrate the new year!

Katrina was voted as the sexiest woman a few months back. Recently, Bips has been voted the sexiest Asian in a poll. The polls may or may not be representative of our population, but they are right as hell in this case. It’s little wonder that Bips and Kat are topping the “fee list” for the New Year’s Eve performances.

Staying At A Bed And Breakfast

Daisy Rehearsal For Her New Years's Eve Performance For CCIL

Get Ready for Party With This Easy Dance Lesson