Lift The Ban, For Comedy’s Sake! 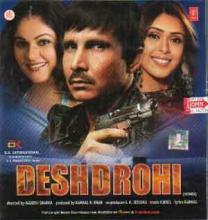 The Deshdrohi story is getting funnier by the by day! On screen and in reality!

Remember the first time you saw the trailer of Deshdrohi and thought it was another of the silly B-grade movies? At first glance it appeared like a sidy attempt to launch a local wannabe. As you continued watching the promos, that didn’t leave you even while you watched Quantum of Solace in the theatre, you realised that it’s an accidental comedy!

It was only after you thoroughly enjoyed the tiny hero trying to recite heavy dialogues, you realised that… oops! It’s a serious subject! It’s a voice against something that the North Indians in Mumbai have been experiencing lately! Only the voice is too comical to be taken seriously by anyone… except the Mumbai Police!

Of all the prospective parties that could have been affected by the film’s subject, the Mumbai Police has decided to raise an objection!

There was a special screening of Deshdrohi for the Mumbai Police on Tuesday. And they reported that the movie was “inappropriate owing to the recent tensions between UP and Maharashtra. The movie contained scenes which would make the conditions worse.”

So, the film was banned even before its official release, which was to be on 14 November.

If nothing else, this ban certainly proves how closely the Mumbai Police has observed this movie. As far as the general public is concerned, nothing except the terrible acting of the new comer, Kamal Khan and his gang of wannabe stars could have raised objection in the film!

The movie appears to be an effortless, or rather, unconscious comedy disguised in a patriotic name. Surely, even the MNS members have been eagerly waiting for its release. Otherwise, wasn’t its promo a reason big enough for them to go on another rampage in the city?

Frenemy By Your Side?

The Hair That Colours You (II)

What He Says And What He Means (While You Are Dating)

Rakhi Cries Out to Mumbai Police!

Akshay,Priyanka And Katrina Performs At Police Umang Show 2013 In Mumbai

Look At Yourself After Watching This Video