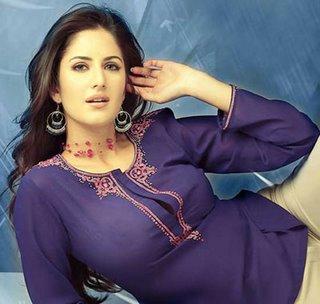 It's amusing how loverboy Salman Khan always manages to find a hamshakal of his lady love!

A few years ago when he was wooed by the gorgeous Aishwarya Rai, he discovered Sneha Ullal, who looked exactly like her. He took her for his film Lucky and ah, what a ‘Lucky’ girl! Simply by virtue of being Aishwarya’s look-alike, she bagged a role opposite Salman Khan!

Now, again Salman has caught hold of an extremely beautiful girlfriend, Katrina Kaif. And he has already found a hamshakal of his girlfriend! He is planning to cast her in his next movie, Veer!

Memsaab wonders how he always manages to find a look-alike of his girlfriend, every time he is unable to work with the original one!

Salman spotted Katrina’s duplicate, Zarina on the sets of Yuvraaj. According to a source, she is younger to Katrina but looks exactly like her when seen from a slight distance.

The source also tells that Zarina will soon be given a different identity for her entry into Bollywood and her name will be changed to a Hindu one!

The girl anyway lost her visual identity long ago! Earlier she was working as Katrina’s duplicate in her films. And now, even after her own film, she will be forever tagged as Katrina’s humshakal since Sallu has picked her for precisely the same reason!

Nevertheless, the sacrifice is worth it if she’s getting to work opposite the sexy Khan!

Is KAT's SIS Coming To Bollywood Too?

Aditya Roy Kapur returns to Instagram with ‘Plan B’ amid lockdown

Zarina Wahab on Aditya-Kangana controversy: Can't accuse of rape because relationship has ended

Katrina Kaif opens up about her new friendship with Ranveer Singh says, ‘He is such a darling’

Katrina might write a book on her Bollywood journey

Who will be the love interest of Katrina Kaif in her upcoming film Zero?

'I really have been a huge fan of her': Akshay Kumar on reuniting with Katrina Kaif

Why Katrina’s loss her project and Jacqueline’s achieve it

Shilpa Shetty And Her Son Photo Shoot For Hello! India May 2013

Shahrukh,Katrina And Big B At KBC