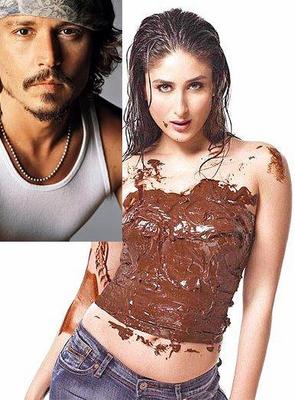 No dearies, Johnny Depp did not propose to Bebo! And if you are wondering who this “Depp” guy is, you have seen him as the lead character in “Pirates Of The Carribean”. While we are on the subject of Johhny, he has been voted as the sexiest man on earth in a couple of polls.

So what is the deal between Bebo & Johhny Depp? Simple, yaar! Kareena was offered a Hollywood film opposite the sexiest man on earth. But she REFUSED!!! In an industry where all the actors dream of making it big in Hollywood, apni Bebo refused a dream role in a dream project. What a dud!

Bebo’s love for her sister Karisma Kapoor is very well known to everyone. So, obviously she dislikes Ash, who has replaced Lolo in the Bachchan khandaan as their adored bahu.

Do you remember the Hollywood flick Bride & Prejudice? Director Gurinder Chadha had offered Bebo a role in that film. The role offered to Bebo was that of “the youngest sister of the leading lady”, Ashwarya Rai. But Kareena assumed that she was being offered the lead role and became interested. When she found out that she was being given the fourth lead, she was obviously shocked and felt humiliated. Besides refusing the offer, she also developed a serious dislike for Madam Chadha and her leading lady. She vowed to never work with either!

So when Bebo was recently offered this prestigious project by “Gurinder Chadha”, she immediately said “NO”.

What can we say here! Bebo’s loss will be someone else’s gain. We wish she were more professional instead of letting old feelings stand in the way of her career. Wouldn’t you have loved to see Bebo opposite sexy Depp? What a loss!

Bebo Loses All That Hair!

'Career' is Kareena's Only Plan!

Parineeti revealed: If she’s offered for Dabangg 3, she would love to do it

Are Kareena and Priyanka Friends Now?