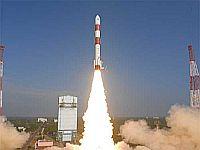 Today, Indian spacecraft Chandrayaan-1 went shooting up, tearing the heights of the skies towards the second brightest object in the sky - The Moon.

Chandrayaan-1 is the cheapest space shuttle ever sent to the moon, the complete mission costing less than Rs.400 crore. The shuttle weighs only 1380 Kg, a little over two Maruti 800s.

The space shuttle is expected to reach its orbit 100 km from the Moon and drop the Moon Impact Probe, with the Indian tricolour painted on it on November 8.

And this is just the beginning…

In its next mission, India plans to travel 146 times farther away - to Mars. The fourth planet from the sun, also known as the red planet due to the red texture of its soil, has long been on the list of Indian Space Research Organisation (ISRO) .

ISRO chairman, Gopalan Madhavan Nair informed the media about the next mission, “Mars is the next natural destination. We've just started planning for it and are looking for proposals from our scientific community to design instruments for an orbiter to the red planet."

Chandrayaan-II is being developed for this mission to Mars.

On the successful launch of Chandrayaan-1, renowned scientist and former president of India, A.P.J. Abdul Kalam expressed his happiness, “I am happy to know about it. It is a matter of time...We will send Indian astronauts to moon!”

It is a proud moment for all Indians!

Irrfan Khan to media: I am deeply touched by your wishes and prayers

Hrithik Roshan shares his journey of recovering from body ailments

Star Priyanka Chopra might even go to the moon for a film, says this director

We are proud, happy and in a celebratory mood: Kajol is pleased with Ajay's Padma Shri honour

Prachi And Sundeep At Oral B Smile India Movement 2013