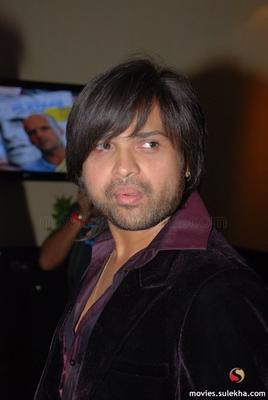 The charisma of Madhuri Dixit is such that not just the young actresses, but even the upcoming actors of Bollywood want to step in her shoes. Her Dancing shoes!

The music composer-turned singer-turned actor, Himesh Reshammiya is turning dancer now! The man definitely considers himself quite multi-talented. What the audiences consider him, although, is a different story…

Anyway, the latest story from tensile town has Himesh tapping his feet to the popular dance number Ek… do… teen originally filmed on Bollywood’s dancing queen of Bollywood, Madhuri Dixit

The popular song from the superhit movie, Tezaab set off Madhuri’s career in Bollywood. Now, even Himesh is hoping for similar popularity by doing the song again in his ishtyle.

Himesh will be remixing the dance number for his upcoming movie, A New Love Ishtory , and then dancing on it!

As Himesh puts in, “It’s an honour and I’m very excited about redoing the hugely successful song. We will shoot the song soon.”

It sure is an honour for you to step into Madhuri’s dancing shoes. But how will the audience, especially the fans of Madhuri, take this experiment is the big question you need to deal with.

The team of A New Love Ishtory will begin shooting the song by September 18. They need not worry about buying the song’s right as the same company is buying the new album, which had bought the songs of Tezaab in the 80s: T-Series.

What they really need to worry about is how to fit Himesh in the peppy dance number, so that the tragic hero doesn’t look too out-of-place! What d’ya say memsaabs?

Madhuri and Sanjay to Recreate the Magic!

When Kalank came to me, I said this song deserves Saroj Khan: Madhuri Dixit

Sunny Leone On The Sets Of Jhalak Dikhlaa Jaa 6

Party On My Mind - The New Song From Race 2