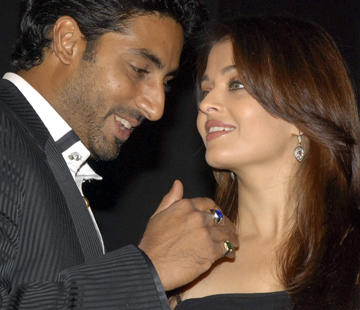 Now now, don't you start imagining this to be a juicy scoop on some temper tantrum thrown by this famous Bachchan couple!

What we are actually talking about here is a remake of the super-hit old time classic "Abhimaan". Remember that 1970's movie made by Hrishikesh Mukherjee? "Abhimaan" was one of the many unforgettable classics made by this ace film maker. This movie has some of the most beautifully captured moments and emotions in the history of Bollywood. From love to jealousy to anger to guilt, to remorse, the movie shows it all.

So what's new about the movie? Well, the film titled "Dhun" is being remade by Rajeev Menon. No marks for guessing who gets to play the lead roles!!! Of course, it's Abhishek Bachchan and Aishwarya Rai Bachchan. The project is expected to go on floors after the couiple finishes shooting for Ravana. Yes, the Bachchans get to don the saintly avtaars of Sri Ram & Sita Mata in a remake of Ramayana, the oldest and greatest story ever told on the face of earth.

So what is it with this couple? Have they decided to do only the projects that cast them together? That's not surprising, considering the big hoopla created by the Bachchans over the (in)famous kiss of Ash-Hritik in Dhoom II! And what is it with our film makers these days? Are they so devoid of any imagination and creativity that they can only remake (read ruin) old stories???? On a serious note, the younger Bachchan couple has taken up a big responsibility on their shoulders now. It is no mean task to deliver performances like the ones in "Abhimaan". Whether you talk of the character played by Jaya Bachchan's or Amitabh Bachchan, they remain etched in our memory. Those performances were so good that perhaps the public will find it hard to digest anything else.

Will Ash be able to don the role of a simple village girl who is miles away from glamour? Will the celebrity couple be able to showcase those raw emotions made famous by the elder Bachchan couple? There's no need to take guesses coz we will all soon find out!

Good News From The Bachchan Household!

Amitabh Bachchan and wife Jaya to pair up on screen again?

Abhishek receives Aishwarya and Aaradhya At The Airport

Iconic Couple Abhishek and Aishwarya At Chime For Change Concert