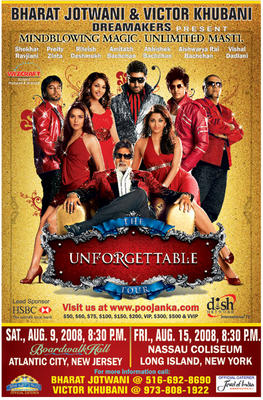 Wasn’t The Unforgettable World Tour taken up to build a strong fan followings and gain publicity? Well, it surely has gained some publicity, but for all the wrong reasons!

The Unforgettable Tour is in news, not because it brought unbeatable publicity to The Bachchans and their allies, but because it is so unaffordable that the show could not even recover its own local costs, leave alone making profits!

The tour was, no doubt, planned to rock wherever it went. The enthusiastic global audience was eager to watch their favourite stars perform even at a price as high as £250 per ticket! But as the tour moved from one place to another, the prices moved up. And finally, at Trinidad, it fell flat on the organisers’ faces!

The show could not recover its local costs in Trinidad. Hundreds of fans had to go back in vain because they could not afford to bring their families along to watch the show!

Ultimately it turned out to be a sad experience for both, the fans as well as the organisers! Haven’t they ever heard of the rules of Demand and supply?

The tour will now move to Atlantic City for a performance on August 9, after which it will travel to New York, Vancouver, London and finally conclude at Düsseldorf, Germany on August 30.

Whether the grand tour by the Bachchan camp will be successful or not is a debatable question. But the camp will certainly not be able to do another world tour like this until they learn the fundamentals of economics!

Saif And Shahid Patch Up!

Here revealed: When and where to watch India vs West Indies 1st ODI Live on TV

Shilpa Shetty to conduct Bollywood-style fitness tour in US, UK, Canada and Australia