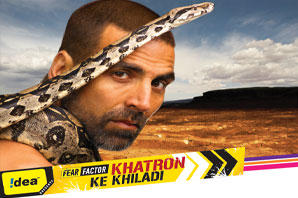 We hope you have kept your evening free today. After all, Khiladi, Akshay Kumar’s new show “Fear Factor - Khatron Ke Khiladi” debuts today on the small screen. As “Colors”, the new channel premieres today, most of its hopes and aspirations seem to be dependant on Akshay.

Fear Factor India –Season 2 promises to be more glamorous, more dangerous and more interesting than ever. For starters, the show has the hottest male in India, Akshay Kumar, as the host. Isn’t that enough to set your pulse racing? Bollywood bombshells compete for the prize money, and they will also provide the glam quotient to the show. The show will be set in a military style Bootcamp in South Africa. The stunts will not only include extreme physical action, but will also showcase many gross and gory stunts. So you can probably expect to see the Bollywood hotties eating live octopuses or squids. Yuck!!!

Akshay Kumar surely is on a roll these days. After delivering back-to-back hits in the last year and half, he doesn’t seem to be in any mood to look back. He has a couple of very promising releases lined up for the next few months. In fact, industry pundits are predicting that Singh is Kingg might be the biggest hit of year 2008! The small screen is also all set to light up with the magic of Khiladi Kumar.

Amitabh Bachchan has very rightly named his World Tour, The Unforgettables. The only thing that he probably doesn’t realize is that The Bachchan Khandaan is not unforgettable. It is Akshay Kumar, who is unforgettable. Had it not been for Akki, the show would not have received such a rocking response in Toronto. Akki seems to be the touchstone of Bollywood. Whatever he touches, turns to gold these days!

Is Akshay The New Bigg Boss?

Akshay And Asin At Mithibai College To Promote Khiladi 786

The Khiladi Is Back!!!
LATEST EVENTS / GALLERIES
Most Read
...loading