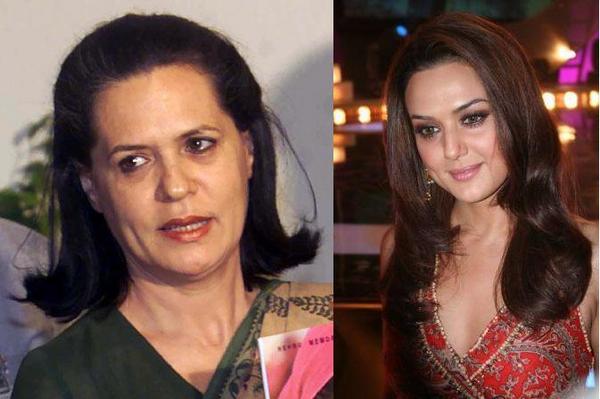 This film is intended to be a biography of sorts. The film will cover various details of Sonia’s life. The audience will be shown incidents from her youth, her work life and of course her love life too. Meeting with Rajeev Gandhi, marriage and life in India – all the aspects will be covered.

The latter part of the film will show her entry into politics and her pivotal role as one of the highest ranking leaders of The Indian National Congress. The movie is yet in the scripting stage and promises to attract audiences from all age groups.

The reason Preity is being offered the role of young Sonia is that she seems to resemble Sonia more than any other actress. It remains to be seen if Preity can pull this one off with aplomb and sans her bubbliness!

What do our Memsaabs and Saabs think about this director's choice? Is Preity the right choice to play Sonia Gandhi? Can she essay the easy seriousness of Sonia's character without getting too intense? Please feel free to leave your comments in the box given below.

Is The Most Powerful Person, An Idiot?

Tulsi Virani And Her Gandhi Connection

Love Sonia to release on september 14

Celebs At The Launch Of Book Mahatma Gandhi And Cinema

Actors Who Played The Role Of The Mahatma Gandhi