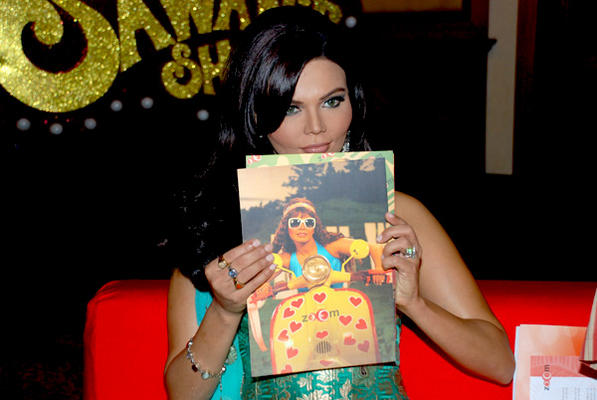 Two of the most controversial celebs of our country have paired up. If you want to see what they are up to, just zoom in on Zoom at 7:30 P.M. on 14th July.

Can't contain your curiosity? Chalo bata dete hain! These two celebrities will be seen sharing screen space for the first time in a celebrity chat show. This is neither Simi's classy rendezvous nor is it Karan's naughty coffee. And if you think we are talking of Sajid's tasteless and cheap comedy, you are wrong once again!

Welcome to the world of Rakhi Sawant. This is a world where diplomacy has been thrown out of the window and stark honesty rules the roost. Yes, Rakhi "Bindaas" Sawant is hosting her own chat show. Every time when you think "This must be the most surprising thing about Rakhi Sawant", she goes out and does something even more surprising. Rakhi has become a household name now. Perhaps she is not more popular than the Bachchan khandaan, but hey, she is not any less popular either. She is often called names, everybody says that she is "publicity hungry". Could be true! But that does not change the fact that she is really really popular.

Zoom has decided to cash in on all this publicity that Rakhi generates everywhere she goes. Rakhi has been offered her own Bollywood based chat show for the channel. Not surprisingly, the show will be called "The Rakhi Sawant Show". If the pretty lass maintains her bindaas and honest style along with her interesting chatter, this show is bound to be a rocking entertainer. The bindaas babe was heard saying that she has been told to lose oodles of weight. The poor gal has been living on a soup-diet for quite some time now coz Zoom wants Rakhi to be bony and "Size Zero".

Still wondering where Aamir Khan fits into the picture? Arre yaar! Aamir is the first celebrity guest of Rakhi's show. Don't miss the first episode coz it might be one of the most interesting ones...

Ah, Who Wouldn't Wanna Be A Kid Again!!!