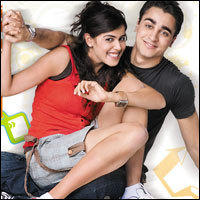 Last year we saw three debutants clash against each other on one famous Friday. It was the clash of SRK’s Om Shanti Om and Snajay Leela Bhansali’s Saawariya. Once again, two very promising young actors are ready to battle it out tomorrow.

The debutants we are talking about come from very illustrious backgrounds. On one side of the big battle is Harman Baweja who is making a dream debut with India’s most expensively made film Love Story 2050. This is a movie that promises to catapault you into the FUTURE. Starring along with Harman in this movie is his “good friend” Priyanka Chopra. And by the way, Harman is the son of producer Pammi Baweja and director Harry Baweja. With such a “filmi” background as this, can Harman really go wrong? The promos of the movie showcase Harman’s exceptional dancing skills. His acting skills shall be seen tomorrow!

Now on the other side of the big battle is young lover boy Imraan Khan. Not the cricketer yaar! This Imraan is the nephew of none other than Aamir Khan, who is leaving no stone unturned to promote the lad’s career. While “Love Story 2050” is touted to be reallllly expensive, Jaane Tu Ya Jaane Na has been made with a modest budget of Rs. 10 crore. Imraan will be seen romancing Genelia D’Souza, who is considered “hot property” these days.

So who do you think will emerge the big winner in this big battle? Will Harman score over Imraan with his space time wrap? Or will Imraan score a win with his simple romancing on the Bandra Bandstand? Well, whoever wins, audiences sure will have a great time watching these two flicks. Even if these movies don’t create any milestones in the industry, the careers of these two debutants are all set to rock. Both the young stars have producers and directors queuing up outside their homes already! Memsaab wishes them both a big pot of good luck.

Vidya Balan, Other Bollywood Stars On A Night Out

Shilpa Shetty Throws A Diwali Party For Family And Friends

The Battle of Compliments