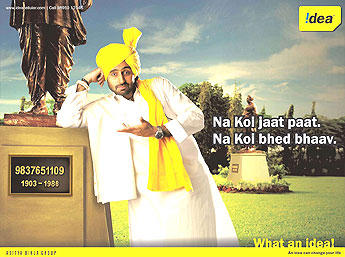 First communal harmony and now education for all… Abhishek Bachchan is certainly doing some good work in advertising!

Where, most other superstars are busy gathering green bucks from whichever television, ad-film or stage shows they can get their hands on, at least one star is doing some work worth talking about!

Funny, emotional, social, touching… very few ads can imbibe all these qualities together in a few seconds of screenplay. And the Idea Cellular campaign is one of them!

Most brands, big or small forget about the idea as soon as they get the sign of a big star on the contract. But here is one brand that chose to be different!

The first ad of Idea Cellar conveyed a beautiful message of communal harmony, along with creating a very favourable image for the brand. The second one, that has recently been launched, gives a very beautiful way of spreading education, through mobiles phones! However larger than life it may seem, it surely finds its way to our heart!

“Idea's new campaign addresses a relevant social issue - education for all. The spread of education among girl children is a must in today's times. I am pleased to be playing a part in this campaign” Abhishek said.

He also said that the first campaign has not just helped Idea’s sales, but has also touched upon the caste issue. And this campaign definitely has the potential to do so!

The perfect mix of a social and advertising campaign!

Get your house sponsored

Abhishek Chucked Out Because of Aishwarya!

Aishwarya And Abhishek At The TTK Prestige Press Conference