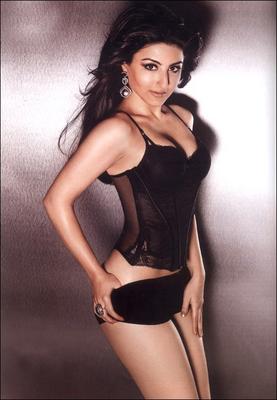 Yes, your favorite “girl-next-door” Soha Ali Khan is desperate to shed the ‘simple’ image. The lovely daughter of veteran actress Sharmila Tagore and former cricketer Pataudi Ali Khan has been known for her sweet and non-glamorous look in all her movies. But the pretty lady has perhaps realized that acting talent is not enough to make strides in Bollywood. One needs to be high on the glam quotient too!

Sharmila Tagore was always known for her glamorous image and many of her characters also essayed this image. But so far, Soha has refrained from delving into the sinful facet of her personality. Perhaps the competition in the industry has grown so much that keeping one’s clothes on is longer an option if one wishes to succeed. Or perhaps, Soha has decided to match her mom in the glam quotient? Or maybe brother Saif's current flavor of the season Kareena Kapoor has inspired Soha to drop all inhibtions?

Well, whatever may have pursued Soha to shed her old image (and clothes), she won’t find many people complaining. Unless the “mahila mukti morcha” people get to see these pictures!

Who's The Hottest Of Them All?

Soha To Give Away Free Homes

“She is the torchbearer of the family”, says Kareena Kapoor Khan on Soha Ali Khan