“I Think Ekta Is Very Sexy” 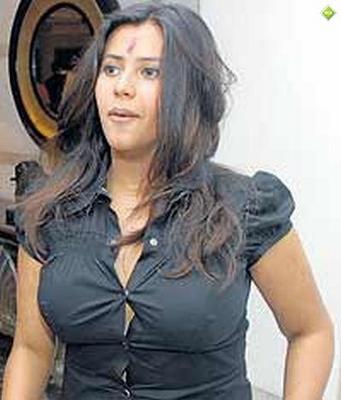 Yes, we are talking of the soap queen Ekta Kapoor. And it’s none other than Ram Gopal “Aag” Verma who finds her sexy!

A few weeks back there was a rumor doing the rounds that Ekta found the promos/rushes of Sarkar Raj so impressive that she sent RGV a blank cheque, showing her desire to co-produce a film with him. Ramu says that the rumor wasn’t entirely baseless. According to him, Ekta offered to send him a blank cheque when she discussed her project with him. This was just a gesture to show that she trusted him implicitly.

Apparently, the way Ekta dealt with him impressed him a lot. He goes on to say that he finds her very sexy. “I have always been a great admirer of Ekta. The fact that she’s a young entrepreneur, her achievements in the television industry, her attitude and strong character has always been admirable but above it all, I think she’s very sexy! She fits into my concept of sexiness.”

Now if want to know what are the standards that this ace film maker has for sexiness, here’s the formula: “My description of sexy is anybody who is strong, intelligent and has got an attitude. Real sexiness is more about personality, than physical sexiness. Strength of character, one’s own individuality and doing exactly what she wants to do. In all that, Ekta fits the bill.”

So will we be seeing more of Ekta and RGV, together, as an item? Probably not! Even though both Ekta and Ramu are single (and ready to mingle), he won’t be asking her out. Says Ramu, “Thanks but that’s not on the agenda. I feel intimidated by Ekta. I like the fact that here’s this beautiful, young woman talking business, money and shares very much. I find that very attractive but being with someone as strong as her would reduce me to feeling like the maid of the house.”

What a boring, tame and mundane end to such an interesting piece of gossip, Right people?

Someone Trashed Ekta Kapoor Shows, and She is Clearly Not Happy!

When You Love A Workaholic

Ekta Kapoor to remake 'U Turn'

Ekta Kapoor is Woman of the Year!
LATEST EVENTS / GALLERIES
Most Read
...loading