To Cheer Or Not To Cheer 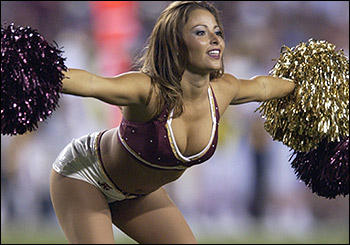 When IPL decided to do it the Bollywood-glamour style, glamorous Bollywood actors-turned politician decided to criticize it Mumbaiya style!

In fact, the politician seemed to be seriously upset, not just with the cheerleading, but with most other aspects of IPL too! His comments were brimming with mockery and sarcasm, "I am afraid that cricket, which has been shortened from five days to one day and now to the T20 format, might be reduced to 'Toss-Toss' in which the winner will be decided through toss”.

And in all the criticism and commenting, he also gave away a “valuably” sarcastic suggestion, “If you are so interested in deploying these cheer girls who dance after hits of fours and sixes, it is better to give chance to the bar girls who have been rendered unemployed after Maharashtra Government put a ban on the dance in bars.”

Hmmm. Sounds interesting. I wonder what the bar girls have to say to this new source of living discovered by Sinha.

Meanwhile, the original cheerleaders face many more objections with the rest of the country (that is not engrossed in watching the matches)! The skinny girls in skimpy clothes on the grounds of IPL matches have been declared "crude and vulgar" by the “authorities”.

According to the state Home Minister, Siddharam Mhetre, "The scantily clad foreign girls' dances are obscene and do not gel with Indian sensibilities, culture and ethos”.

Thought, it’s not just our concerned politicians who are realising the seriousness of the issue. Some cricketers too, are objecting to the cheerleaders.

"The girls in skimpy dresses should be removed from the ground as this is distracting to batsmen," Pakistan's aggressive scorer Shahid Afridi said.

They sure are distracting, not just the players, but the spectators as well! Many cheerleaders agreed that they are disgusted and disturbed over the suggestive remarks from Indian spectators!

"We do expect people to pass lewd, snide remarks but I am shocked by the nature and magnitude of the comments people pass here (in India)", cheerleader Tabitha from Uzbekistan said.

But whatever the reports may be, the Indian spectators (including the minority of non-cricket fans in India) are enjoying the perfect kitchdi of Cricket, Glamour, Bollywood and the Ad-mad world, like never before!

No Sexy Skirts for KKR Cheerleaders This Year!

Do You Want To Be Shahrukh’s Angel?

Sidharth And Shraddha Promote Ek Villain At The IPL Semi-Finals

Bappi Lahiri Celebrates Holi With His Family And Friends

Most Amazing Card Trick Ever!